On This Day: Ronaldo comes back to haunt United 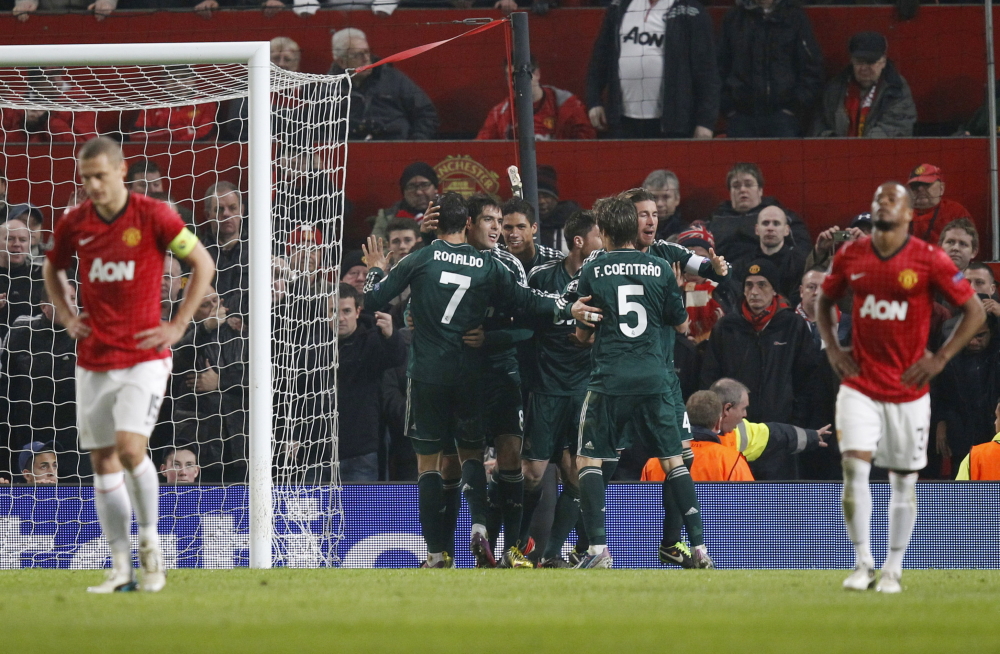 Sir Alex Ferguson was left cursing Cristiano Ronaldo and the officials as Real Madrid knocked Manchester United out of the Champions League on this day in 2013.

In what was to be his final European campaign in charge of the Red Devils, Ferguson could only stand and watch as Los Blancos came back from the dead at Old Trafford to eliminate his team at the last-16 stage 3-2 on aggregate.

Having battled to a 1-1 draw in the first leg at the Bernabeu it was all looking rosy for the three-time European champions when a Sergio Ramos own goal gave them a second half lead.

With his team well on top, the turning point came in the 56th minute when Nani was given his marching orders by Turkish referee Cuneyt Cakir for a high foot on Alvaro Arbeloa.

Replays suggested the sending off was extremely harsh and Ferguson refused to speak to the press straight after the game such was his disgust at the decision. The Scot would later go on to say that it was “hard to keep your faith” in refereeing when decision like that are made.

One United fan took his frustrations one step further, contacting the police to complain about Cakir.

With the likes of Mesut Ozil, Luke Modric, Kaka and Angel Di Maria on the pitch, it didn’t take long for Real to start opening up their hosts.

Modric levelled the game on the night and the tie with a beautiful curling effort from the edge of the box in the 66th minute before Ronaldo popped up to break United hearts.

The Portuguese was given a rousing reception when he stepped out onto the pitch before kick-off in what was first appearance at Old Trafford since his record-breaking £85million move to the Bernabeu in 2009.

However, it was only the away section cheering when the former golden boy of United slide in at the far post to stab in Gonzalo Higuain’s cross in the 69th minute. Ronaldo’s celebrations for his eighth European goal of the season were muted but his team mates couldn’t contain themselves after snatching victory from the jaws of defeat.

Fergie’s men dug deep in an attempt to get back into the tie and Real goalkeeper Diego Lopez needed to make several smart saves to keep their lead intact, while Wayne Rooney, who was surprisingly dropped for the game, missed a glorious chance late on.

Real nearly sealed it when Kaka hit the post but 2-1 was enough, in the end, to send them through to the quarter-finals.

Los Blancos boss Jose Mourinho was unusually sheepish in his post-match press conference, admitting the best team had lost as Real became the first away team since AC Milan in 2005 to win a Champions League knockout game at Old Trafford.

The Spaniards would sweep aside Galatasaray in the next round before coming unstuck against Borussia Dortmund in the semi-finals and their failure to progress in Europe would ultimately hasten Mourinho’s exit as he left the club by mutual consent at the end of the season.

For United fans, they could console themselves with Ferguson ending his tenure with yet another league title but a missed opportunity in Europe might still stick in the throat of the fans and Fergie himself.