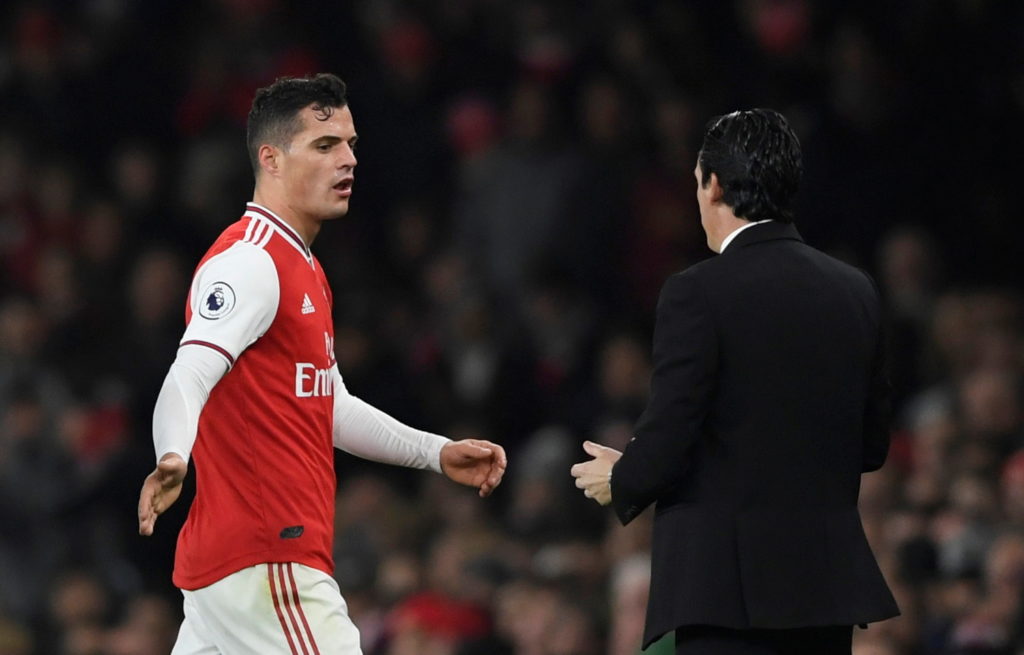 Manager Unai Emery has taken the decision to strip Granit Xhaka of the Arsenal captaincy following his recent outburst against supporters.

Xhaka used expletives against fans as he was jeered following his substitution in a recent 2-2 draw against Crystal Palace, while also removing his shirt and cupping his ears.

The 27-year-old has since issued an apology of sorts, explaining that ongoing social media abuse aimed at his family played a large part in the incident against the Eagles.

In the immediate aftermath of the incident, Arsenal said they would offer counselling and other support mechanisms as Emery said Xhaka was “devastated, sad and very down”.

The Switzerland international has since sat out the following two draws against Liverpool and Wolves and has not travelled for the Europa League clash against Vitoria on Wednesday afternoon.

And it was in Guimaraes, talking at his pre-match press conference, where Emery revealed he had taken the decision to relieve Xhaka of the captain’s armband.

“He is not today here, but also I think we need time with him and first protect him also to be calm and training with us every day,” he replied when asked about Xhaka’s continued absence from the team. “But I was speaking with him this morning and also I decided he is not one of the captains in our group. I decided that and I told him this morning.

“He accepted my decision. And also I told the other captains the decision.

“We need to carry on and focus for tomorrow’s match and next Saturday’s match. I needed to make a decision and now it is closed.”

Former captain Laurent Koscielny left under a cloud during the summer after refusing to travel on the club’s pre-season tour of the United States, eventually being sold to Bordeaux.

In response, Emery held a blind ballot amongst his players which saw Xhaka top the poll, and in a five-man leadership group, Pierre-Emerick Aubameyang, Hector Bellerin, Alexandre Lacazette and Mesut Ozil were also selected.

The Spaniard confirmed another vote will not take place and Aubameyang will now lead the team.