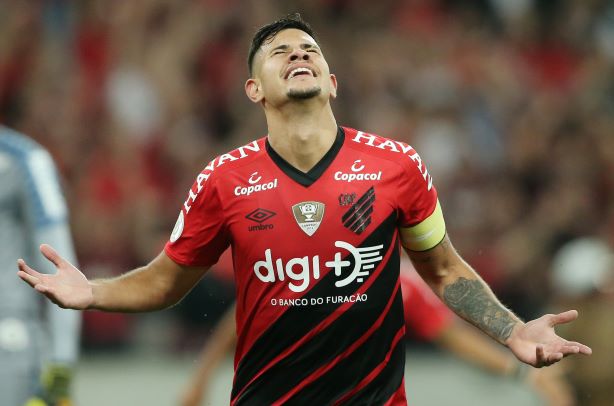 Arsenal are set to intensify their pursuit of Athletico Paranaense midfielder Bruno Guimaraes, according to reports in Brazil.

The 22-year-old was confirmed as a Gunners transfer target earlier this week by Athletico Paranaense president Mario Celso Petraglia, but he believed Arsenal would not make a move until the summer.

“Arsenal are interested, but will only make an offer towards the end of the season,” he is quoted as saying.

However, concerns that he could move elsewhere have sparked the notoriously-slow Londoners into action and they could be tempted into bringing forward a bid for the Brazil Under-23 star.

Goal Brasil claim Arsenal will accelerate their pursuit of Guimaraes and eye a January deal with Edu leading talks with Athletico Paranaense, who have already rejected a €20million bid from Benfica.

It is also understood that Arsenal’s long-serving Brazilian scout Everton Gushiken has tracked the midfielder since 2017.

And the club sent a scout to Gran Canaria in November to monitor him as he played alongside Gabriel Martinelli for the Brazilian Olympic squad at the Torneio de Tenerife.

Edu showed his instincts were right when he swooped to sign long-time Manchester United target Martinelli from Ituano in the summer, for whom great things are predicted

And it is reported that one of the reasons for Arsenal’s sudden urgency in setting up a deal for Guimaraes is the return of former scout Sandro Orlandelli – a South American talent spotter who has been re-hired by the Gunners from Manchester United.

Like Martinelli, Guimaraes holds a European Union passport so he would not require a work permit to play in the UK.

Speaking at his press conference on Wednesday, the Spaniard said there is “no truth” in reports that Arsenal will make moves for Manchester City centre-back John Stones or AC Milan midfielder Franck Kessie.