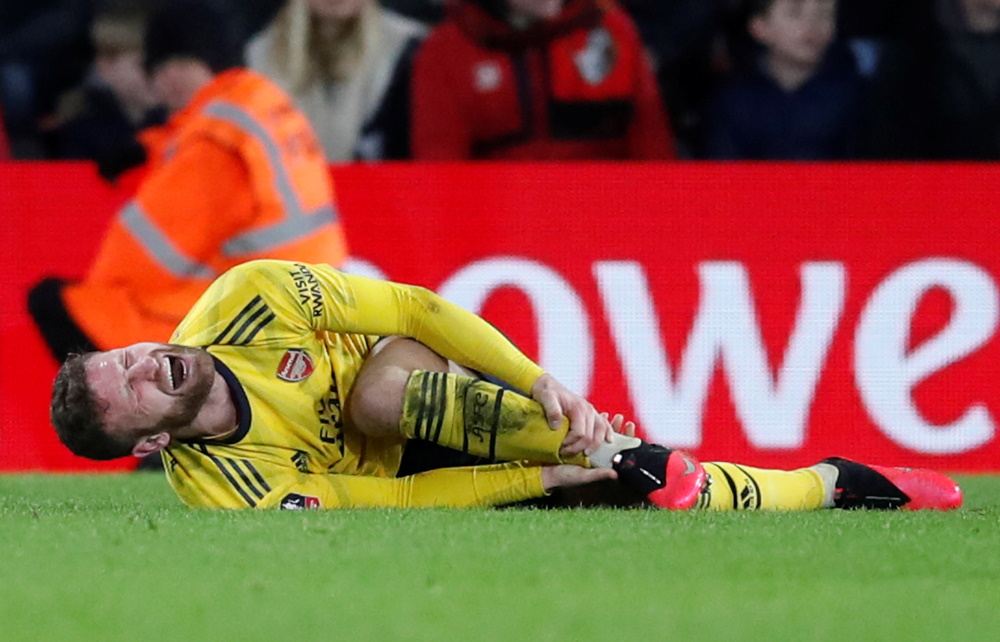 Arsenal's Mikel Arteta faces a nervy wait to discover the extent of the ankle injury suffered by Shkodran Mustafi in the Gunners’ 2-1 FA Cup win at Bournemouth.

The Germany defender was carried off the pitch on a stretcher after landing awkwardly on his right ankle as Arsenal eased past the Cherries at the Vitality Stadium on Monday night.

Bukayo Saka and Eddie Nketiah struck to book Arsenal an FA Cup fifth-round trip to Portsmouth, while Sam Surridge slotted a late consolation for the Cherries.

However, progression through to the fifth round has potentially come at a real cost for the Gunners with further injury issues at the back.

Arteta admitted Mustafi could be facing a spell on the sidelines, but still had to wait for the result of scans on Tuesday.

“We’ll be assessing him between today and tomorrow but when a central defender has to come off, hopefully I’m wrong, but normally it’s not good news,” said Arteta.

Asked if Mustafi’s situation could alter Arsenal’s January transfer plans, Arteta added: “We have a very clear intention of what we wanted to do in the market with the resources we have.

“If we can do it that’s fine but his fitness won’t change that.”

Arsenal had been searching for defensive reinforcements in the January transfer window before Mustafi’s injury and were thought to be close to signing Flamengo defender Pablo Mari, only for that deal to collapse at the last moment.

Monday night also saw Arsenal drawn in the fifth round of the FA Cup against League One outfit Portsmouth at Fratton Park.

The performances of the likes of Nketiah, who was called back from his loan spell at Leeds United this month, and Joe Willock have given manager Arteta something to think about ahead of the Gunners next outing in the Premier League on Sunday.

Anyone call for a goal? Big performance by the team to secure a place in the next round. God is good! 📞⚽️🙏🏾 #EN30 @Arsenal pic.twitter.com/ImC0tVUJND

Arsenal make the trip to Turf Moor to face a Burnley side who are level on points with the north London outfit after the first 24 games of the league campaign.