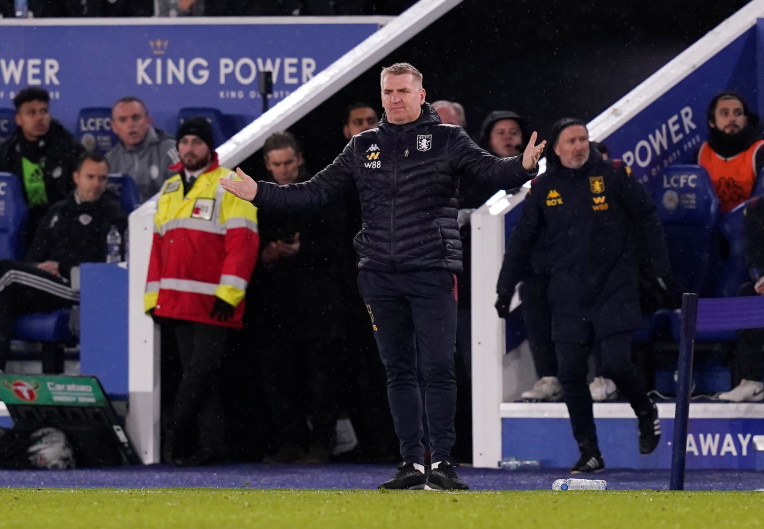 Dean Smith says his Aston Villa side will take ‘confidence and belief’ from the 1-1 draw with Leicester City on Wednesday night.

Villa have had a tough start to life back in the Premier League and have work to do to avoid relegation back to the Championship, but in the Carabao Cup clash at the King Power Stadium, they showed they had the stomach for a fight.

On another night Villa could have been heading back to Villa Park with a 1-0 advantage for the semi-final second leg after Frederic Guilbert gave them the lead courtesy of a 28th-minute strike.

However, they could not hold on and Kelechi Iheanacho struck 16 minutes from time to earn Brendan Rodgers’ side a deserved 1-1 draw.

Leicester resoundingly won 4-1 at Villa Park in the Premier League in December and Smith was encouraged by how his team had learned from that heavy loss.

The tie is now on a knife edge heading into the second leg at Villa Park on January 28th and Smith is feeling in an upbeat mood regards his side’s chances.

“We had to learn lessons after the goals we gave away at Villa Park, where we were poor,” he said. “They counter-attacked us very easily and we never got to grips with that and we learned the lessons very well because I thought it was a real solid defensive performance.

“We relied on some blocks and some good saves from Orjan (Nyland) and all in all it was a really good defensive performance and that is testament to the players.”

Nyland made a couple of good saves to deny Jamie Vardy in the first half before thwarting James Maddison late on as Leicester pushed for a winning goal.

Villa are in the hunt for a new goalkeeper after losing Tom Heaton to long-term injury and the performance of Nyland, who Smith was quick to point out is an international, was a big boost for the club.