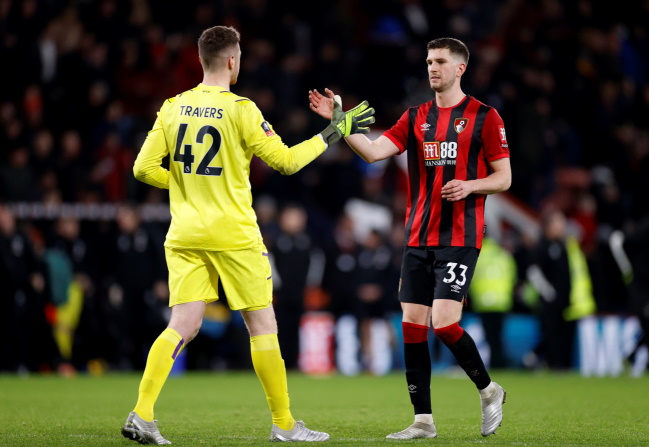 Bournemouth manager Eddie Howe says he has no plans to loan out goalkeeper Mark Travers despite a lack of game time.

The Republic of Ireland international has been forced to watch on from the bench or the stands this season, with Howe putting his faith in Aaron Ramsdale so far.

Ramsdale has played in all of Bournemouth’s 21 Premier League games, but he has been unable to stop the club slipping into the relegation zone.

Fans have started to panic about the club’s fortunes, with the Cherries now two points from safety.

Howe’s men have now won just two of their last 15 games in the top flight, and he could be forgiven for tinkering with his team.

The former Burnley boss has four goalkeepers in his squad, with Artur Boruc and Asmir Begovic both on the books as well.

That's what we wanted to see ❤️ pic.twitter.com/Vr3aCLGsW5

Travers gave fans a reminder of his ability as he kept a clean sheet in the 4-0 FA Cup win over Luton Town last weekend. He has featured in every minute of the club’s cup games so far, and Howe says Travers is still too important for him to leave on a temporary basis.

He told the Bournemouth Echo: “No thoughts of loaning Mark. He is too important to us at the moment.

“He’s a fantastic lad. A great worker, very focused on improving himself, which is what we’ve told him he needs to do – just focus on him and be the best Mark Travers that he can be. He’s done that every day.”

Travers played twice for Bournemouth in the Premier League last season, but he will need to bide his time for the foreseeable future. Ramsdale will be back between the sticks this weekend, as Bournemouth welcome Watford to the Vitality Stadium on Sunday afternoon.