What has gone wrong at Bournemouth this season? 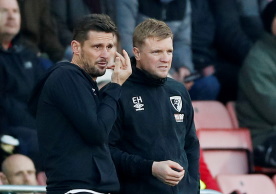 If the alarm bells were not sounding around the Vitality Stadium before the Watford game, they are now following a 3-0 home defeat.

The Hornets are on the crest of a wave following the appointment of Nigel Pearson, who has taken them from certainties for relegation to a side that now sit outside of the bottom three after Sunday’s win.

The fact that Pearson has been able to turn things around quickly without making any new signings, shows what can be done when the same bunch of players start taking orders from a different voice.

The powers that be at Bournemouth could possibly be thinking about making a change, and no doubt boss Eddie Howe has to take some responsibility for their alarming slide down the table this season.

Howe’s reluctance to switch from a tried and trusted 4-4-2 formation may not be helping matters. Have Bournemouth now become too predictable? Plan b and c could be needed in games and it is down to Howe and his coaches to come up with a new approach.

So there is a case to be made for a fresh voice and new ideas coming into the dressing room but this is not the only reason for their struggles this season.

The players themselves have to stand up and be counted, and some of them who performed so well last season, simply aren’t doing so in this campaign.

Collectively Bournemouth have been poor, but the dip in form of Ryan Fraser and Callum Wilson in particular has been a big issue.

The duo were on fire last season, attracting interest from the likes of Arsenal and Chelsea, but they have been virtually invisible in this campaign and without that creative spark and goals, Bournemouth have suffered.

The Cherries had issues at the back last season, leaking way too many goals, but the fact they were popping them in at the other end, helped paper over the cracks.

They still continue to concede too many, but things have dried up at the other end.

The midfield is lacking creativity, particularly in the heart of it as Howe prefers to go with the defensive minded Philip Billing and Jefferson Lerma, while the Cherries faithful will tell you that Harry Wilson, as good as he is, is being played out of position out on the wing and should be more of a ‘number 10’.

New signing Arnaut Danjuma, a £16million summer capture from Club Brugge has not lived up to expectations, while Lloyd Kelly has not kicked a ball this season.

Injuries to key players such as David Brooks, Nathan Ake and Adam Smith have also hit the Cherries hard, while reports claim Chris Mepham has also been added to the injury list.

Hope springs eternal as players will return to fitness, there is still plenty of time to get out of trouble and the transfer window is open.

But after nine defeats from 11 games something needs to be done and fast otherwise their five-year stay in the Premier League is coming to an end.