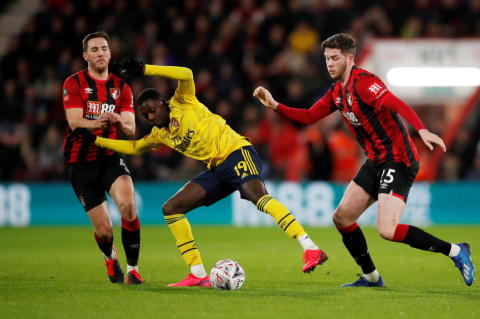 Bournemouth defender Jack Simpson says he will do all he can to prove he is good enough for the first team this season.

The 23-year-old has only made 10 Premier League appearances since he graduated from Bournemouth’s academy in 2015.

Simpson had been linked with several Championship clubs in the last few weeks, with Middlesbrough thought to be leading the race to land him on loan. He started Monday’s 2-1 FA Cup defeat to Arsenal at the Vitality Stadium, with Howe confirming after the full-time whistle that he would be staying on the south coast.

Simpson has only made seven appearances in all competitions this season, but he still believes he has what it takes to become a first-team regular.

He told the Bournemouth Echo: “Obviously, I want to play for this football club. I knew a couple of days ago I’d be staying. I spoke to the manager about it and just said my focus is here.

“I just want to do well, it was disappointing against Arsenal, I’d have liked to have played a bit better and had a bit more of an impact, and we would have loved to go through to the next round.

“But from now until the end of the season my focus is here, trying to get into this team. I think the focus for everyone at the club is staying in the Premier League and showing what we can really do.”

There are plenty of options for Howe at right-back so Simpson faces an uphill battle to establish himself in the manager’s prefered XI.

Adam Smith is keeping Simpson out of the picture for now, but his impressive performance on Monday may stand him in good stead. He will now hope to play a part in Saturday’s crucial six-pointer against Aston Villa in the Premier League.

Just two points separate the two sides, and a win for the Cherries would see them leapfrog the Villians in the standings.