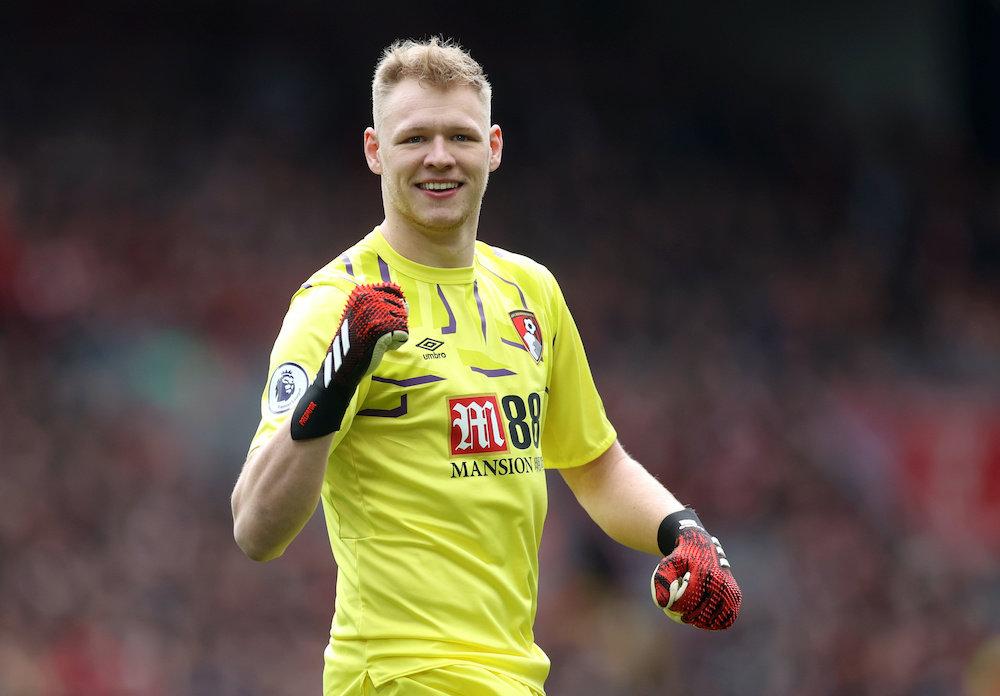 Goalkeeper Aaron Ramsdale has been one of the few bright sparks during a difficult 2019-20 season for Bournemouth.

Ramsdale has been the outright number one for Bournemouth this season after forcing his way into the first-team picture last term.

The 21-year-old’s arrival at the Vitality Stadium went under the radar after completing a move from Sheffield United for a reported £1million in January 2017. He failed to make a single league appearance for the Blades after graduating from the academy, although he did get the nod to make two outings in the FA Cup.

Despite a perceived lack of senior experience, Bournemouth were impressed with what they had seen during several scouting missions. Bournemouth loaned the stopper out in January 2018 to Chesterfield, while he spent the second half of 2018-19 with AFC Wimbledon.

His time with The Wombles proved fruitful as he made 20 League One appearances and won the club’s Young Player of the Season.

Upon returning to Bournemouth ahead of the 2019-20 campaign, Eddie Howe was left with a dilemma.

Former number one Asmir Begovic had fallen out of favour and was loaned out to Qarabag while Artur Boruc, who turned 40 in February, can’t be regarded as a long-term option.

Howe had to decide between Mark Travers, who made two Premier League appearances in 2018-19, and the returning Ramsdale.

The latter got the nod and despite Bournemouth’s struggles this season he has demonstrated his quality on a regular basis.

Ramsdale has only kept four clean sheets in 28 outings but he shouldn’t be forced to shoulder the blame for countless errors made by his defence.

Indeed, his shot-stopping ability proves his importance to the club and shows how Bournemouth’s situation could be even more severe without Ramsdale between the sticks.

The England Under-21 international ranks third in the division for most saves made this season, 15 shy of Newcastle’s Martin Dubravka, who tops the chart.

So it’s no surprise that Ramsdale has been tipped to leave the Vitality in the near future as Bournemouth’s long-term status in the top flight remains precarious.

Relegation is a serious possibility for the Cherries and Ramsdale would be wise to jump ship to further his own career ambitions.

Chelsea have been heavily linked with the youngster as Kepa Arrizabalaga continues to cause headaches for all concerned with the club.

Frank Lampard recently dropped the Spaniard in favour of veteran Willy Caballero and many believe he could be moved on in the summer.

Chelsea have turned to youth since Lampard’s arrival over the summer with the likes of Tammy Abraham, Mason Mount, Fikayo Tomori, Reece James and Callum Hudson-Odoi all stepping up.

Ramsdale fits the profile and would surely jump at the opportunity to join a club as prestigious as Chelsea.

He has even been mentioned as a future England international, with Howe understandably backing his man to win a cap, and with the European Championships moved to the summer of 2021, he could boost his chances of earning a spot in Gareth Southgate’s squad by linking up with the Blues.

Jordan Pickford currently remains the number one pick and the Premier League boasts a wealth of talented English goalkeepers.

The battle is set to be an interesting one over the next few years with plenty of major competitions on the horizon.

But as has been displayed with the striking crisis at present, a couple of injuries, along with the prestige of playing for a ‘big-six’ club like Chelsea, could put Ramsdale right in the frame.