Brighton star admits “everyone has problems against Sheffield United” 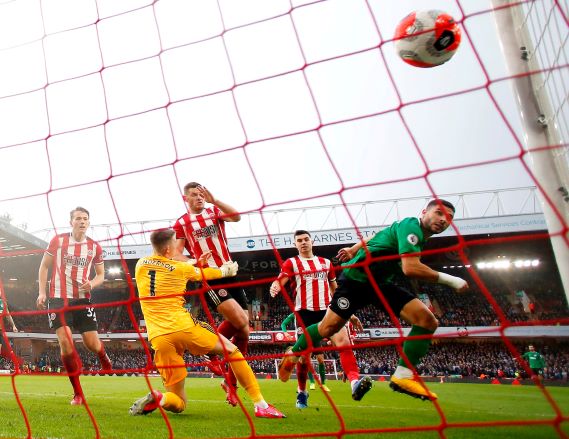 Brighton striker Neal Maupay says "everybody has problems against Sheffield United" and praised the club that targeted him last year after Saturday's 1-1 draw.

Maupay was a summer 2019 transfer target of Blades boss Chris Wilder, but the Frenchman chose to join the Seagulls for a reported £16million from Brentford in early August.

Wilder had actually spent slightly more on Oli McBurnie a few days earlier – but it was Maupay’s name on the scoresheet on Saturday as the two sides played out a 1-1 Premier League draw.

The Blades were pushing for all three points in the second half with Graham Potter’s men forced to dig in to earn a point to take back to Sussex.

Maupay said: “Against teams like Sheffield United, you have to defend with 11 players to get anything and that is exactly what we did starting with Glenn [Murray] and myself right through the team.

“Our quality in possession was not that good. They were better than us in that area so we had to rethink. The difference was that we realised we had to change our ambitions.”

Albion’s Neal Maupay knew he would get back in the goals https://t.co/g0HmHMvBZh pic.twitter.com/AsIymstLmM

And, with a games that looks easier on paper to come against Crystal Palace net week, Maupay was just glad to get the trip to Bramall Lane out of the way.

“We are in a relegation battle,” added Maupay, who ended a 631-minute personal goal drought on Saturday.

“But in this league, every team has problems against Sheffield United. Not too many have coped like we did today. We showed great battling qualities and that is what we will need for the rest of the season.”

One point per game from the final 11 fixtures should be enough to ensure Brighton stay up, but many will question the wisdom of giving Potter a new long-term deal just months into his tenure of things go awry for his team.
Chris Wilder Neal Maupay Oli McBurnie
Share