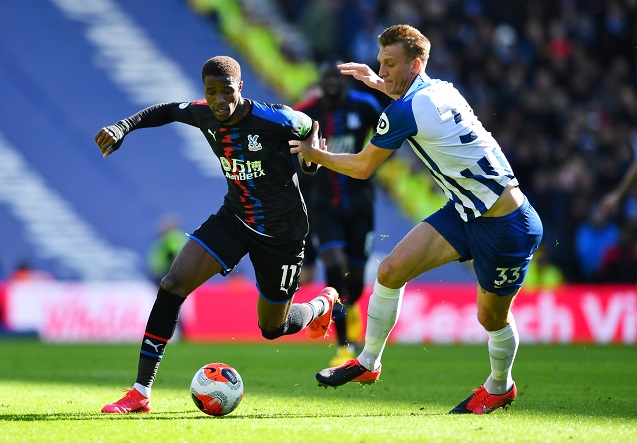 Brighton defender Dan Burn has full faith in his side to end their dismal run of Premier League form and get out of trouble.

The Seagulls have had an atrocious start to 2020 and have not won a game since December 28.

Since then, Graham Potter’s side have embarked on an eight-match winless run, only picking up four points in that period.

That run of form has seen them hurtle towards the drop zone and Brighton are now just one point away from trouble.

It was a Saturday to forget for the club after losing 1-0 at home to arch rivals Crystal Palace thanks to Jordan Ayew’s second-half strike.

Wins for West Ham and Watford later in the afternoon have put Brighton in a bleak situation.

The south coast outfit were as high as eighth in the Premier League earlier in the season after a run of three wins in four games.

And, Burn is backing himself and his team mates to get back into a similar vein of form and escape danger.

“We haven’t won in eight (league) games but you wouldn’t be able to tell in there (the dressing room),” the 27-year-old told the club’s official website.

“We’re an experienced team and we’ve been in this situation before, so I’m backing us to get out of it.”

Saturday’s match against Palace saw the Seagulls have plenty of chances but fail to capitalise against Roy Hodgson’s stubborn Eagles.

Brighton had 23 shots on goal, with eight of them on target, and they also dominated possession.

However, an inspired defensive rearguard from Palace meant the hosts walked away empty-handed.

Their next game is on Saturday when they face a difficult-looking trip to Molineux to face Nuno Espirito Santo’s European chasers, Wolves.

March does not get any easier as they face a home game against Arsenal the week after before travelling to Leicester in what could be a season-defining run of games.

Brighton have been in the Premier League for three seasons now and narrowly escaped relegation last season, finishing just two points and a place above Cardiff.