Let’s be Frank: the hard work starts here for Lampard and Chelsea 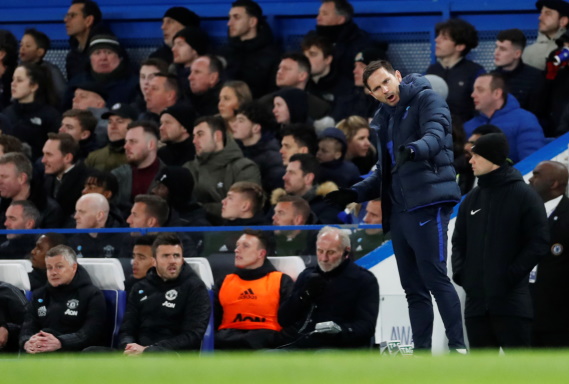 Manchester United may have won 2-0 at Chelsea on Monday night but all the talk has been about the Blues and boss Frank Lampard.

Is Lampard the right man? Do the players have enough in the tank to make the top four? Was VAR at fault or were the Blues not good enough?

The 4-0 opening weekend defeat at Old Trafford looked ominous for Chelsea but things have gone relatively well since. However, cracks have appeared and now the real work starts.

A win on Monday would have moved Chelsea nine points clear of United but goals from Anthony Martial and Harry Maguire saw the Red Devils take the points and close the gap to three.

Chelsea were unlucky. Both Kurt Zouma and Olivier Giroud had goals ruled out by VAR, while Maguire could have been sent off before the break for kicking out at Michy Batshuayi.

Listening to the post-match reaction, VAR was the culprit. However, there does seem to be an issue for Chelsea when playing at home.

There has to be a degree of balance, with Fred seemingly pushing Cesar Azpilicueta, which prompted the Basque to nudge Brandon Williams, therefore ruling a goal out, while Maguire maybe should have gone for the Batshuayi incident.

The facts are this: Chelsea on Monday managed just one shot on target despite having 69% possession.

So what now for Lampard and Chelsea? Let’s look back first and appreciate the boss’ frustration about the club’s inability to add in January after spending copious amount on lawyers to overturn the transfer ban that had prevented him from spending next summer.

In normal circumstances, a run of four home games in the next five fixtures would be a positive. However, that streak sees them welcome Tottenham on Saturday, Bayern Munich in the Champions League, Liverpool in the FA Cup on March 3, then improving Everton, under former Chelsea boss Carlo Ancelotti, travelling to the Bridge on March 8.

Now is the time Lampard has to make his money. In just his second year in management, the 41-year-old is fourth in the Premier League, through to the last 16 of the Champions League, and into the fifth round of the FA Cup.

'We're fourth and it's in our hands. The gap has closed but not many people expected us to be fourth at this stage of the season so the fight starts now.'#CHEMUN

However, barring Everton, Chelsea have lost more games than anybody else in the top 10 of the table, while again, barring the Toffees, their tally of 36 conceded is the worst of any top-half team.

So why then in January were Chelsea linked with Edinson Cavani and are now reportedly interested in Jadon Sancho? Maybe a strong central defender like Maguire is the answer?

Lampard described the game, on talkSPORT, as “Groundhog Day” due to his team’s inability to take their chances.

Yes, they are in an excellent position, fourth in the table, but United and especially Tottenham are coming up hot on their heels.

Chelsea were bullied at times on Monday and unless Lampard identifies where his team needs to improve, it could be a sharp learning curve for a group and manager who has promised so much but could well fall short.