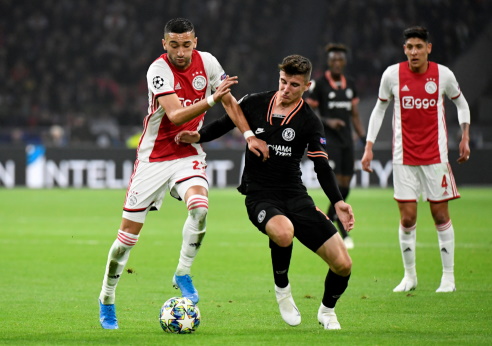 Chelsea have wrapped up a deal for Hakim Ziyech, but what do we know about the player and can he replace Eden Hazard?

Anticipating that Hazard could be on the move in the summer, Chelsea did bring in Christian Pulisic the previous January before the transfer ban came in.

However Ziyech is the first big capture since the Belgium’s departure and comparisons are already being made between the two.

It is no surprise that some are touting him as the new Hazard so expectations will be high when he eventually arrives at the end of the season.

First he will see out the campaign at Ajax so Chelsea fans will no doubt be tuning into any games they can to check out their new signing.

They have of course already seen him close up this season when Chelsea took on Ajax in the Champions League, and he clearly did enough to convince manager Frank Lampard to pull out all the stops to get him on board.

Lampard admits there have been times this season where Chelsea have struggled to ‘unlock the door’ and he believes that Ziyech will be the player to do just that. Just like Hazard did on so many occasions.

So where will Ziyech fit into Chelsea’s system? And how much freedom will he be given? It has been suggested he will thrive the most if, like Hazard, he is given the freedom of the pitch and encouraged to take risks. That is pretty much what he does with Ajax, so it could be a good idea to allow him to do the same here. Only time will tell.

During his time with Ajax, Ziyech has had more assists, shots, chances created and dribbles completed than any other player in the Eredivisie but he will only repeat that if Lampard ‘sets him free’.

Chelsea play a 4-2-3-1 system and Ziyech would be suited to play out on the right of the three, where he likes to cut in on to his left foot, or as the number 10. He can even play as a number eight in midfield.

It is a huge ask to expect Ziyech to fill the boots of Hazard, and if he can get anywhere near the Belgium international’s statistics it would be a huge bonus for the Blues. Hazard did bag 85 goals in 245 Chelsea appearances. So far Ziyech has 38 in 108 appearances for Ajax.

It is also difficult to compare the two when it comes to their performances in the league as it is fair to say the Premier League is a much higher standard than the Eredivisie.

However, from all the stats out there comparing league performances and those in European fixtures, there is a familiar pattern.

Hazard comes out on top for goals scored, dribbles, progressive runs and not losing the ball, while Ziyech tops the charts when it comes to assists, shots, interceptions, defensive duels, ball recoveries, final third passes, through balls and pressing actions.

Ziyech also has a bit more time on his side at the age of 27 and if he can adapt to the Premier League there is every chance he can go on to be every bit as successful as Hazard. A big ask yes, but possible if Lampard gives him the freedom he will crave.