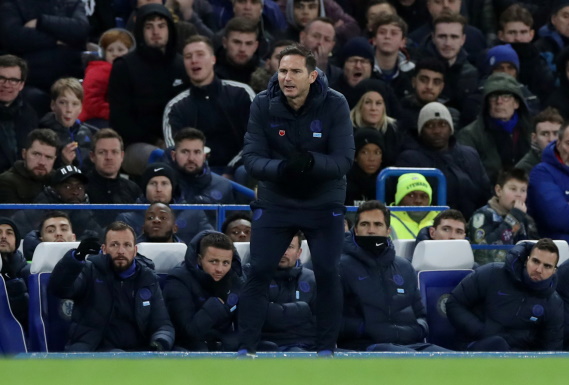 With Chelsea winning just one of their last six games, some are questioning Frank Lampard and his ability to lead the squad into next season's Champions League.

Despite a 4-0 defeat to Manchester United on the opening weekend, the Blues made an impressive start to life under Lampard, losing just one of their next 11 Premier League games.

By mid-November, Chelsea looked to have have taken a firm grip on fourth spot, before they hit a bad patch and suffered five defeats in seven league games – including back-to-back home losses to Bournemouth and Southampton.

With their rivals for the European places now starting to put good runs together, the Blues themselves face a tough looking run of fixtures at the worst possible time. It starts with a home clash on Sunday against an Everton team that have already beaten them at Goodison Park.

The following test for Lampard’s men comes on March 14, when they travel to the Midlands to face relegation-threatened Aston Villa, before hosting the defending champions Manchester City on March 21.

Then, as we enter the month of April, Chelsea will take on two teams fighting for survival – West Ham away on April 5, before a home clash with Watford on April 12.

But the fact that Chelsea still have Champions League qualification in their own hands at this stage of the season, is an achievement that Lampard should be proud off, especially when you consider the facts.

‘We are still confident that we will be in the top four in May.’ – Andreas Christensen 👊 pic.twitter.com/9bvL5LL1Dy

In his first season of top-flight management, the former England midfielder had to work with the squad that he inherited and that included having to find a way to cope with losing the team’s only superstar, Eden Hazard, in the summer.

The transfer ban was lifted prior to the January transfer window, but the team above him were unable to sign anyone to add to the squad, especially frustrating for a manager crying out for a striker.

As the likes of Manchester United have found out, when you have a large proportion of young players in your squad, you are going to have to deal with inconsistency as they get used to the level required to be successful in the Premier League.

The job Lampard has done has not gone unnoticed by his peers though, with Jurgen Klopp the latest manager to praise the Chelsea boss. The Liverpool chief said: “Super job from what I can see. I like the project a lot. Having that amount of sensational young players is nice.

Klopp added: “To fight for the CL places that means you have to beat three or four teams with similar possibilities and circumstances. That’s not so easy.”

More importantly for Lampard and his young squad, the Chelsea fans still seem to be behind both the manager and the players as they look to hold on to their top-four spot.