Lampard assures Kepa he has a future at Stamford Bridge 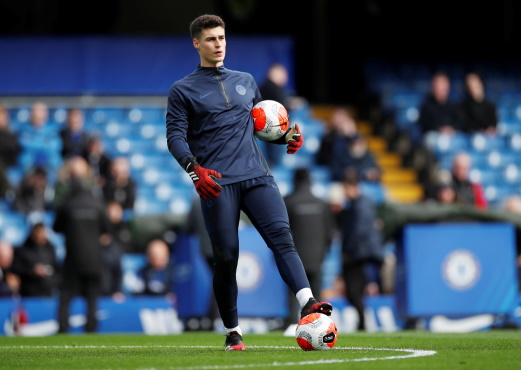 Chelsea manager Frank Lampard says goalkeeper Kepa Arrizabalaga has shown a great attitude in recent weeks and still has a big future at the club.

The 25-year-old became the most expensive goalkeeper in the world when he moved to London from Athletic Bilbao for £71.6million in August 2018.

Kepa has since played 85 games for the club in the Premier League, Champions League, Europa League, FA Cup and EFL Cup but he has recently lost his place in the starting XI.

The Spaniard has not played for the Blues since the 2-2 draw with Arsenal on January 21, with that game coming four days after his error handed Newcastle United a 1-0 win.

Former Manchester City goalkeeper Willy Cabellero has since started the last six games, but Kepa may return this week.

Chelsea have only won one of their last five games, and they are back in action on Tuesday night as they host Liverpool Stamford Bridge in the FA Cup.

Lampard has previously hinted that Kepa may return against the Reds and he says the former Bilbao ace has worked very hard to prove his worth.

“He’s been professional, as expected,” Lampard told reporters. “He’s trained well, and he’s kept his head down, supported the team. I say the same every week because I get asked this every week, but he’s been good.

“Every player here is in control of their destiny in terms of how they play and how they train.

“This is Chelsea, and we’re trying to close the gap to the top. There’s nobody who can be relaxed or loose, we’re pushing every day. Of course in the summer we look at the group as a whole, but we’re not looking beyond the game tomorrow night.”

After Tuesday’s FA Cup encounter against the Reds, Chelsea are back in Premier League action as they come against former boss Carlo Ancelotti at Stamford Bridge on Sunday.