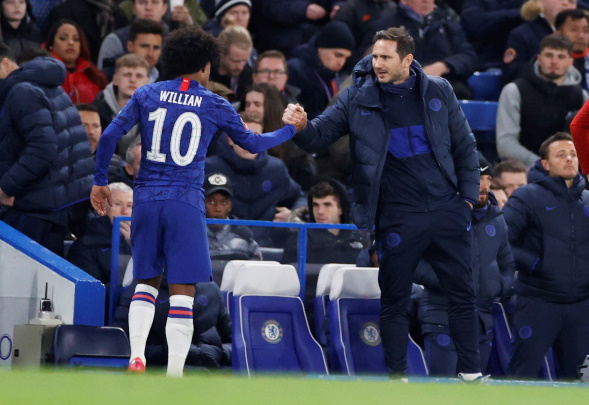 Chelsea’s victory over Liverpool on Tuesday night came at a cost as both Willian and Mateo Kovacic were added to the injury list.

The Blues are through to the quarter-finals of the FA Cup as Willian and Ross Barkley got the goals in a 2-0 win at Stamford Bridge, but it was not all good news as the former and Kovacic both picked up Achilles injuries.

Speaking after the win, boss Frank Lampard said Kovacic’s injury was the worst out of the two, but is hoping neither player will be out for too long.

However, it is a concern nonetheless as the injury situation show now sign of easing up.

Jorginho will miss Sunday’s Premier League clash with Everton due to suspension and the Blues could be without as many as nine frontline talents this weekend.

“We’ll have to have a bit of a count on Thursday, with the game on Sunday, and see where we’re at,” Lampard said. “You can moan about injuries, and I have done, but the reality is you have to get on and keep fighting.

“When the players show the spirit they have tonight you hope it gives them a bit of strength, whoever comes in, to keep going forward. It was a very impressive performance from us.”

One player who could answer the manager’s SOS this weekend is diminutive teen star Billy Gilmour after the midfielder excelled in the win over Liverpool.

Gilmour bossed the victory over the Premier League champions-elect, with the 18-year-old rightly named man of the match in just his second Blues start this term.

The Rangers youth product, who only stepped up to Chelsea’s senior squad on a permanent basis last month, has already forced his way into Lampard’s immediate plans and the former Blues midfielder insists the fresh-faced youngster is ready for the challenge.