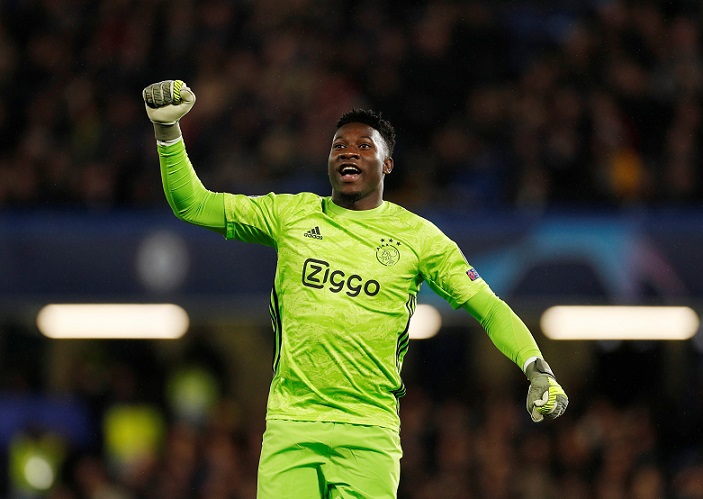 Ajax keeper Andre Onana is reportedly keen on a move to Chelsea this summer.

Onana was linked with a move away from the Amsterdam outfit last summer after starring in Ajax’s incredible run to the Champions League semi-finals.

The Cameroonian stopper, who spent five years in the Barcelona academy before joining Ajax’s youth set-up, opted to remain with the Dutch giants but, according to Goal, he is now ready to leave the Eredivisie.

Good work to stay atop the @Eredivisie Added strength for my teammates in our next battle in the @EuropaLeague.

Former club Barca have been linked with Onana although the Ajax star is believed to prefer a move to the Premier League.

Chelsea may face competition from a domestic rival as Spurs are also interested. However, with the Blues in pole position to claim a Champions League spot, that could hand them the advantage in the fight for his signature.

Chelsea have also agreed to sign Hakim Ziyech from Ajax ahead of the summer transfer window and that may also work in their favour, both in terms of convincing Onana to join his current team-mate at Stamford Bridge and in holding further discussions with the Dutch club.

Kepa Arrizabalaga is Chelsea’s current first choice but has found himself out of favour and behind Willy Caballero at times this season.

The London club forked out €80million [£71.6m] to sign Kepa from Athletic Bilbao in the summer of 2018, a world record for a goalkeeper, and initially he made a strong start to life at Stamford Bridge.

This season he has been far less impressive and has managed just 42 saves in total, with a save percentage at 56 per cent.

Chelsea are understood to be willing to listen to offers for Kepa but Onana would be open to a move to the club even if he does have to battle it out with the Spaniard for the number one spot.