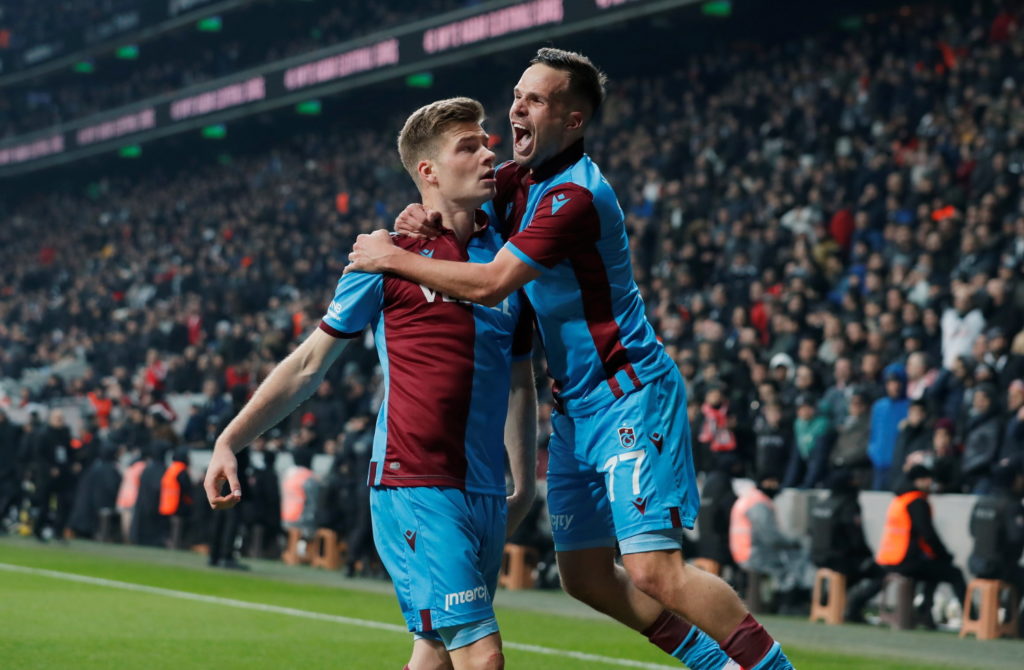 Alexander Sorloth flopped in the Premier League with Crystal Palace but is now on the radar of Real Madrid after starring in Turkey.

Few had heard of Sorloth when he signed for Palace from Danish outfit Midtjylland in January 2018 for a reported £9million.

He made the switch to the Premier League after notching 14 goals in 25 appearances across all competitions.

However, he was unable to continue scoring at that impressive rate in England and he was loaned out to Gent for the second half of 2018-19 without a single Premier League goal to his name.

Palace handed Sorloth four starting league outings during his debut season and a further 12 appearances from the bench in 2018-19.

Indeed, he has only bagged once for the Eagles, scoring in a 1-0 win at Swansea in the League Cup, and became a much-maligned figure.

During his brief spell in Belgium, Sorloth scored four times in the league and didn’t appear to do enough to convince Palace that he was ready for action this season.

Sorloth was sent out to Trabzonspor on a two-season loan deal last summer and his exploits could land the Turkish Super Lig side a first league title since 1983-84.

They currently sit top of the table after 22 games with goal difference keeping them clear of Galatasaray and Sivasspor.

The Norwegian is the top scorer in the division with 19 league goals to his name, while also laying on a further six assists.

An involvement in 25 goals from 22 appearances is extremely impressive and even more so when considering Palace have only scored 24 times in the Premier League this season.

Trabzonspor reportedly have the option to make his deal permanent at the end of 2020-21 for just €6million, however, it’s understood they will face serious competition for his signature.

Reports suggest Palace attempted to bring Sortloth back to Selhurst Park in January to solve their attacking issues but the terms of the deal state he can’t be recalled until the summer.

Meanwhile, Real Madrid and Newcastle had scouts in attendance to watch him score twice in Saturday’s 2-2 draw at Besiktas.

With interest only set to grow further over the coming months and Sorloth hoping to star for his country at Euro 2020, Palace find themselves in a difficult situation.

Why would Sorloth want to return to the club that failed to show enough faith in him after initially struggling, as many others have, to adapt to life in the Premier League?

Should Trabzonspor decide to take up their option-to-buy clause they could swiftly move him on for a huge profit with reports claiming Real Madrid are will to stump up £42million.

Jordan Ayew is Palace’s top scorer in the league this season with six as Christian Benteke has once again failed to find the kind of form that saw Liverpool buy him from Aston Villa in 2015.

Connor Wickham is currently on-loan at Sheffield Wednesday due to his lack of goals and the centre-forward role continues to be a major issue at Palace.

But with so many players unable to convert on a regular basis surely Palace boss Roy Hodgson, who is hoping to earn a new contract, must start shouldering the blame.

Palace aren’t completely safe from relegation this season and the tactics are clearly not right.

The focus on Wilfried Zaha has possibly prevented others from being nurtured in the right way and Sorloth appears to be a prime example of that approach.

Of course, many will argue that the Turkish top-flight is not at the same standard as the Premier League but Sorloth was never truly given the chance to flourish.