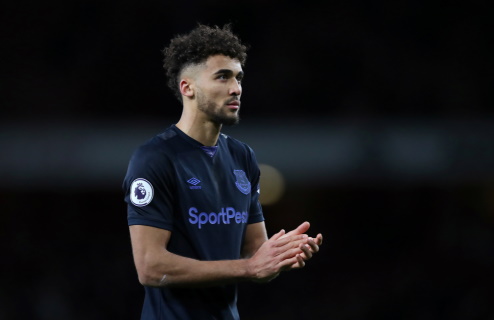 The 22-year-old has never made an appearance for the senior Three Lions team, but he has represented England at Under-20 and Under-21 level.

Calvert-Lewin made 14 appearances for the former, scoring six goals, while he netted seven while playing for the Under-21s for two years.

The former Sheffield United academy graduate is now looking to step up to the senior England side off the back of enjoying the best season of his career to date, having scored 14 goals in 30 appearances.

Calvert-Lewin grabbed his fourth goal in five matches during Sunday’s 3-2 defeat to Arsenal, and he had further chances to add to that tally as Everton failed to take their opportunities.

Two strikers in form, but who will finish as our top scorer this season? #EFC 🤔

Since Marco Silva left in December, first caretaker boss Duncan Ferguson and then Carlo Ancelotti in December have brought the best out of Calvert-Lewin and his form could see him named in Southgate’s squad for this summer’s tournament.

The Three Lions play friendlies against Italy and Denmark in March and Green believes he deserves a call-up for those games, believing he would fit Southgate’s system.

Green told BBC 5Live Sport: “He fits the mould, doesn’t he? He is a young player, he has been in the Under-21s, and he [Southgate] likes to promote the young guys up, in a sense fast-track them.

“Needs must at times, and we are at that moment, and we have got games coming up.

“Tammy [Abraham] has comeback this weekend from injury.

“You are looking at who is next, and you are saying, at the moment, form wise and, also causing other teams problems, and the way you fit into Gareth Southgate’s structure of a team, he would fit that as that target man.”

Southgate is currently sweating over the fitness of Tottenham’s Harry Kane and Manchester United’s Marcus Rashford with both doubtful for Euro 2020 due to hamstring and back injuries respectively.