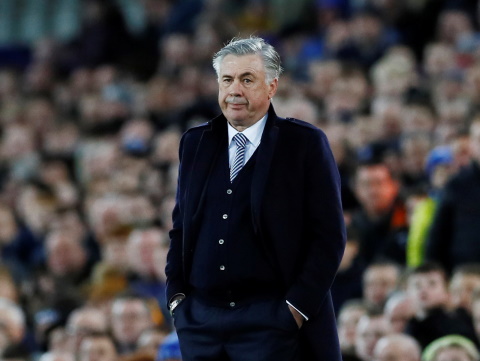 Everton manager Carlo Ancelotti has promised the club's supporters the side will get back to winning ways quickly after they were humbled by Chelsea.

The three-times Champions League winner endured a miserable return to Stamford Bridge after his side left London with nothing.

Ancelotti won a domestic double with Chelsea during the 2009-10 campaign after claiming the Premier League and FA Cup. While he received a warm welcome, he was soon left frustrated after watching Frank Lampard’s men run riot.

Mason Mount opened the scoring after 14 minutes before further goals from Pedro, Willian and Olivier Giroud.

Everton had travelled south with the aim of closing the gap to Chelsea, but they are now 11 points behind them.

Seventh-placed Sheffield United are six clear of the Toffees and Ancelotti is expecting his team to respond against Liverpool on Monday night in the Merseyside derby.

He told the club’s official website: “This club wants to be competitive, we are still there [to fight for Europe] and we still need to fight for this.

“This performance from the whole team was not good enough. It was the worst day and worst performance since I arrived.

“We were not good enough defensively and made a lot of mistakes offensively. We can come back and, as we usually do, show good fighting spirit.”

Everton are now without a win in three matches and their next few games will probably make or break their season.

After Liverpool, they face Leicester City, Tottenham Hotspur and Southampton and after those clashes the race for the Champions League could be over.

Aston Villa will make the trip to Merseyside on May 2 before Bournemouth take on the Toffees on the final day of the season.