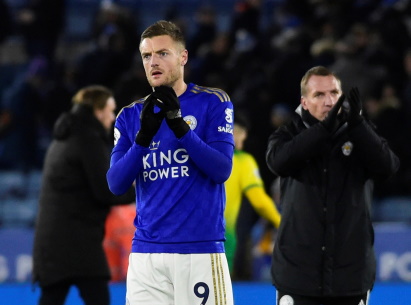 Leicester boss Brendan Rodgers insists his side are ignoring the gap to leaders Liverpool after being held to a 1-1 draw against Norwich.

The Foxes have been viewed as the main challengers to Jurgen Klopp’s side, who look on course for the Premier League title, but the dropped points against the Canaries mean they are now 10 points adrift.

Tim Krul’s own goal cancelled out Teemu Pukki’s ninth of the season to leave Leicester in second place.

The Foxes were denied a ninth straight top-flight win by the excellent Canaries with Jamie Vardy also drawing a blank, halting his run of scoring in eight consecutive games.

Liverpool’s earlier 2-0 win over Watford maintained their form but Rodgers admitted the gap to his former side is not his focus.

Rodgers admits that his side were a touch below par on Saturday but says it is a sign of how far they have come when people are disappointed with a draw that keeps them in second spot.

“It’s not something we’ve spoken about, everyone else has. These players have been brilliant,” he said. “We weren’t quite at our level but we managed to get back and get a point. We’ll press the rest button and get ready for a [Carabao Cup] quarter-final on Wednesday [at Everton].

“It was probably the right result, we didn’t start so well and our passing was slow.”

Pukki opened the scoring after 26 minutes when he found the corner from Emi Buendia’s defence-splitting pass. But Krul turned the ball into his own net 12 minutes later when he tried to save Vardy’s glancing header which was going wide.

It meant Vardy was not credited with the goal and missed out on scoring in a ninth straight game.

Rodgers added: “I’m disappointed for him, he has made a great run across.I thought it was his goal until I came in but he didn’t have a lot of service, he was terrific throughout.”