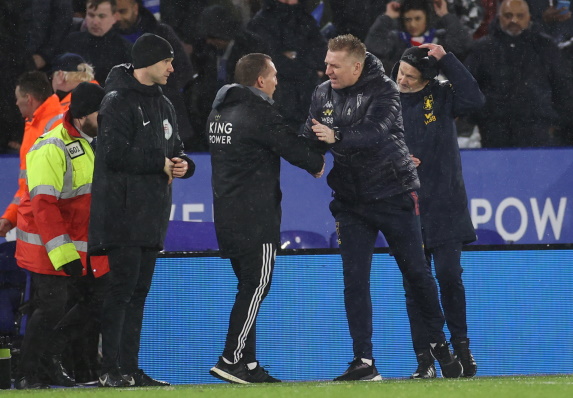 Brendan Rodgers has described Kelechi Iheanacho as a ‘big talent’ who is finally proving his worth after he came to Leicester City’s rescue on Wednesday night.

The Foxes appeared to have pulled off a huge coup after the striker arrived from Manchester City in the summer of 2017 in a £25million deal.

However, the move has not quite gone according to plan as the player has failed to justify his price-tag and has been the subject of criticism from some quarters.

This season has seen a vast improvement though as Iheanacho has six goals in eight appearances, the latest of which came on Wednesday night after he stepped off the bench to earn Leicester a 1-1 draw in their Carabao Cup semi-final first leg.

It was the 23-year-old’s third goal in the competition and Rodgers is pleased to see Iheanacho reaping the reward for his hard work.

“He works so hard every day,” Rodgers said. “He’s either making a goal or scoring a goal now and he works so hard in his pressing game. He was a threat when he came on tonight and I’m delighted for him.

“It was a great finish. He’s been so important for us. You see his confidence all the time whether he starts or comes into the game, and that’s the beauty of him now – he is making an impact in games.”

“It is perfectly set up for the second leg and we have the confidence of going there and playing well before so we look forward to it,” Rodgers added.

Leicester resoundingly won 4-1 at Villa Park in the Premier League in December but the Foxes would be happy to take a less convincing win on this occasion as long as they go through.