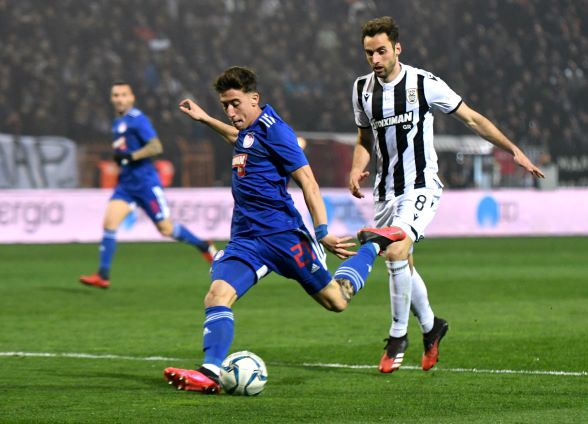 Leicester have reportedly joined the list of clubs interested in Olympiacos left-back Kostas Tsimikas as they get ready for big summer bids for Ben Chilwell.

Tsimikas, like Chilwell, has had an excellent season and reports in Greece also claim he has attracted interest from Serie A duo Napoli and Inter Milan.

The Foxes are said to be looking at left-back options because they want to be prepared in case the situation of England international Chilwell changes over the coming weeks and months.

Boss Brendan Rodgers doesn’t want to lose Chilwell this summer but the club will sell at a certain price as they did when Harry Maguire was allowed to make the switch to Manchester United last August for a £80million – a world record fee for a defender.

Chilwell has been linked with a move to Chelsea while Manchester City have been credited with an interest and it was reported that Atletico Madrid tried to sign him last summer.

Should Chilwell depart, Leicester will buy a top-class replacement and although the Foxes were linked to Charlie Taylor earlier this season, Tsimikas boasts the international and Champions League experience that the Burnley star does not have.

Greek website Sportime claim Leicester are looking at Tsimikas, who has made 36 appearances in all competitions this season – including 12 in the Champions League and three in the Europa League.

The 23-year-old has come through the ranks at Olympiacos and after a couple of loan stints with Esbjerg and Willem II, has now established himself as one of the first names on the teamsheet

Last week, Leicester were said to be keeping a close eye on Omar Elabdellaoui’s situation at Olympiacos as they considered bringing in some cover at right-back.

The Foxes suffered a devastating injury blow just before the Premier League was suspended due to the coronavirus outbreak when they announced that Ricardo Pereira would miss the rest of the season.