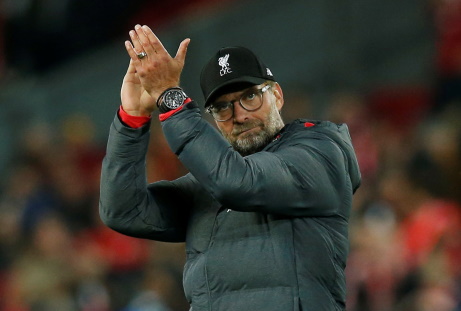 Jurgen Klopp has highlighted the role sporting director Michael Edwards has played in his decision to extend his commitment to Liverpool through to 2024.

Back in August, Klopp hinted that he could take a year-long sabbatical from football once his contract with Liverpool expired at the end of the 2021/22 campaign.

And a month later, the manager’s agent Marc Kosicke weirdly suggested that the English weather could bring an end to Klopp’s successful Anfield tenure, although he left the possibility of an extension open.

But Liverpool announced the manager’s extended two-year commitment on Friday to scotch any rumours of his exit, although the self-effacing Klopp took the opportunity to pay tribute to the work of transfer guru Edwards in the club’s success.

The German said Edwards’ input and collaboration “has been just as important as anyone else’s” in getting Liverpool into a position to compete for the game’s top honours.

Klopp, who moved to Anfield in 2015, guided Liverpool to their sixth European Cup/Champions League title in June and his team are currently eight points clear at the top of the Premier League.

Edwards was Liverpool’s newly-appointed technical director when Klopp arrived, but has since overseen a remarkable run of transfer market success in the role of sporting director that he has held since the summer of 2016.

Klopp, who will be 56 when his new contract is slated to expire, also thanked the club’s owners for the backing he has received from them.

“This club is in such a good place, I couldn’t contemplate leaving,” the former Borussia Dortmund boss added.

“For me personally this is a statement of intent, one which is built on my knowledge of what we as a partnership have achieved so far and what is still there for us to achieve,” the 52-year-old Klopp told Liverpool’s official website.

“When I see the development of the club and the collaborative work that continues to take place, I feel my contribution can only grow.”