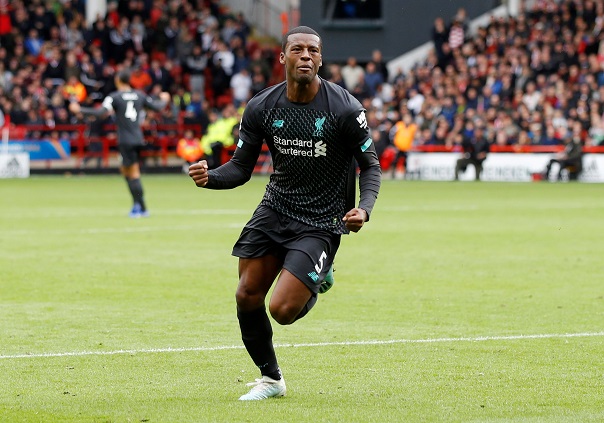 Liverpool now hold a 10-point lead at the top of the Premier League but an injury picked up by Georginio Wijnaldum took the shine off their win over Watford.

A brace from Mohamed Salah was enough to earn Liverpool a 2-0 victory at Anfield on Saturday and that, coupled with Leicester’s 1-1 draw with Norwich, meant the Reds extended their advantage at the top of the standings.

However, it wasn’t all good news for Jurgen Klopp’s side as Dutch international Wijnaldum was forced off just before the hour mark with what looked like a muscle injury.

With Liverpool set to take on Aston Villa in the Carabao Cup next week and then travel to Qatar for the Club World Cup, Wijnaldum’s absence will certainly come as a blow.

“Muscle. I don’t know anything else,” Klopp told reporters after he was asked about Wijnaldum’s injury.

“[Whether he can travel to Qatar] is actually in the moment one of my smallest concerns – he could probably fly – but my problem is more what exactly the injury is and I don’t know that yet.

“It’s a muscle thing and you never want to have a muscle injury.”

The injuries are seemingly starting to mount up for Liverpool, with Wijnaldum joining fellow midfielder Fabinho and defenders Joel Matip and Dejan Lovren on the treatment table.

Klopp insists injuries are not uncommon at this stage of the season and Liverpool are certainly not the only side dealing with such problems.

“In these moments it always makes it immediately more difficult, but it’s not only us, all other teams have the same problems,” the German added. “We have to deal with these situations, that’s clear.

“We will see – tomorrow we know more.”

Liverpool are not back in Premier League action until Boxing Day when they travel to King Power Stadium to take on nearest rivals Leicester, who may have closed the gap at the top of the standings back down to seven points by the time that fixture comes around.