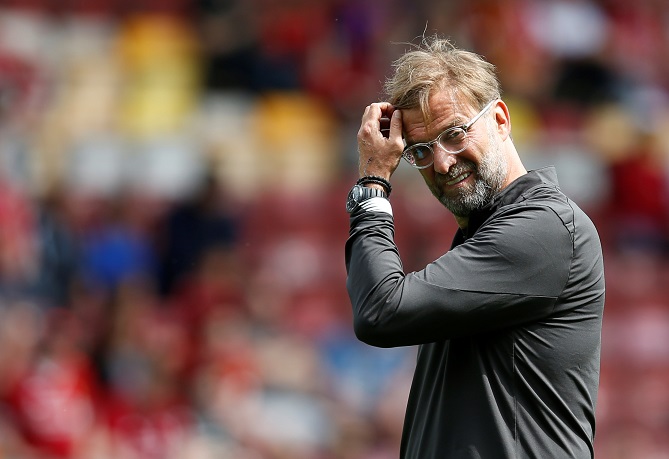 Liverpool manager Jurgen Klopp has admitted he has some selection worries ahead of the FA Cup Merseyside derby this weekend as injury problems mount up.

Reds midfielder Naby Keita became the eighth player to be added to the injury list on Thursday night when he picked up a groin problem in the win over Sheffield United, which restored Liverpool’s 13-point lead at the top of the Premier League and means they have gone a full year without being beaten in the top flight.

With defenders Joel Matip, Dejan Lovren and Nathaniel Clyne, midfielders Alex Oxlade-Chamberlain, Xherdan Shaqiri, Fabinho and forward Rhian Brewster all out, Klopp finds himself down to just 12 senior outfield players, plus new signing Takumi Minamino and a number of youth team members for the visit of Everton in the eagerly-awaited FA Cup third-round tie on Sunday.

“I won’t tell Carlo Ancelotti my line-up, but I will do what I think is right to do,” said Klopp.

With a first Premier League title their main target, the Reds boss may well field a young side like he did for the Carabao Cup quarter-final defeat at Aston Villa last month, as his senior players were in Qatar winning the Club World Cup.

The loss of Keita is a blow for Klopp and the hope is he will not be out for long, as it reduces his options for a midfield that has already carried a heavy workload in 33 games so far this season.

It also increases the pressure on the manager to add to his squad in January – something he is reluctant to do.

Liverpool were grateful, therefore, that an early goal from Mohamed Salah and one from Sadio Mane midway through the second half meant they did not have to over-exert themselves against Sheffield United.