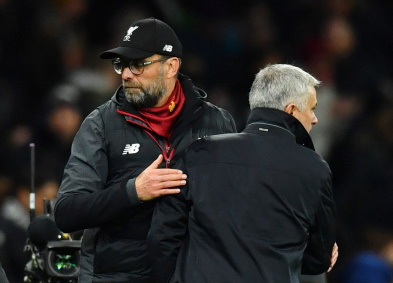 Jurgen Klopp says there is still a long way to go despite Liverpool setting even more records at Tottenham on Saturday.

There is no stopping the Reds as they pass every test put before them on their way to the Premier League title, but Klopp is still refusing to get carried away with the situation and says there is a long way to go before they can celebrate.

Klopp’s men roared a massive 16 points clear at the top of the table thanks to Roberto Firmino’s first half-strike which secured a 1-0 win over Spurs, extending their unbeaten record to 38 league games.

In amassing an astonishing 61 points from a possible 63 over the first 21 matches of the campaign, Liverpool have now made the best-ever start to a top-flight season in any of Europe’s top five leagues.

Despite the staggering statistics, such records do not concern Klopp, who has his eyes firmly fixed on the bigger prize.

“Today was difficult, we made it difficult because we didn’t finish them off.”

Liverpool should have been out of sight by half-time but Firmino saw an effort cleared off the line and Mohamed Salah was not his usual ruthless self in front of goal.

Instead they only led by Firmino’s well-taken strike, and in the second half Son Heung-min blazed a glorious chance to equalise over the crossbar before substitute Giovani Lo Celso slid in to meet Serge Aurier’s cross but somehow missed the target from six yards.

With second-placed Leicester losing to Southampton on Saturday afternoon, and Manchester City 17 points behind ahead of their game with Aston Villa on Sunday, it is only a matter of time before Klopp’s men are crowned champions.