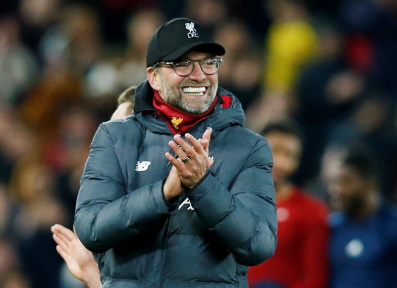 It has been suggested that Liverpool could dominate just like Manchester United did, but surely it all depends on Jurgen Klopp staying put.

Liverpool and United go head-to-head at Anfield on Sunday afternoon and not too long ago it would have been the visitors who were the favourites to pick up all three points, with the home side holding out hope of causing an upset.

How times have changed. Liverpool are very much the team of this season as they have brushed aside all that is put before them on their way to the Premier League title.

They were outstanding last season as well when just missing out on the title to Manchester City and picked up another European Cup when beating Tottenham in the Champions League final.

Klopp has built an outstanding side and his management skills are taking them to another level. The question is now being asked, how far can they go? Can they dominate for years to come?

Former Tottenham and Newcastle midfielder, and now football pundit Jermaine Jenas believes they are capable of dominating just like Sunday’s opponents did under the leadership of Sir Alex Ferguson.

It is a huge claim. United won 13 Premier League title under Ferguson during his 21-year tenure at Old Trafford. This included three in a row on two separate occasions.

As well as having a stunning team for the majority of Ferguson’s time at the club, the key to United’s success was the fact that the Scot was there for so long.

Klopp would need to do the same you would think and that is unlikely to happen. In this modern era it is hard to imagine a manager staying at a top club for such a long period of time.

The German is the key and when the time comes for him to move on, Liverpool will find it almost impossible to replace him. It can be done of course, but the Liverpool fans will be worried it could start to fall apart if Klopp does depart.

Manchester City will also come again. Pep Guardiola’s men are having a tough campaign in the Premier League, but with the Spaniard pledging his future to the club and with money no issue, they could bounce back next season.

Then there is the possibility of United and Chelsea getting their act together again.

Liverpool should definitely enjoy the moment and the success they are having under Klopp, but it is hard to image them dominating in the same fashion as Manchester United unless their manager plans on hanging around as long as Ferguson.