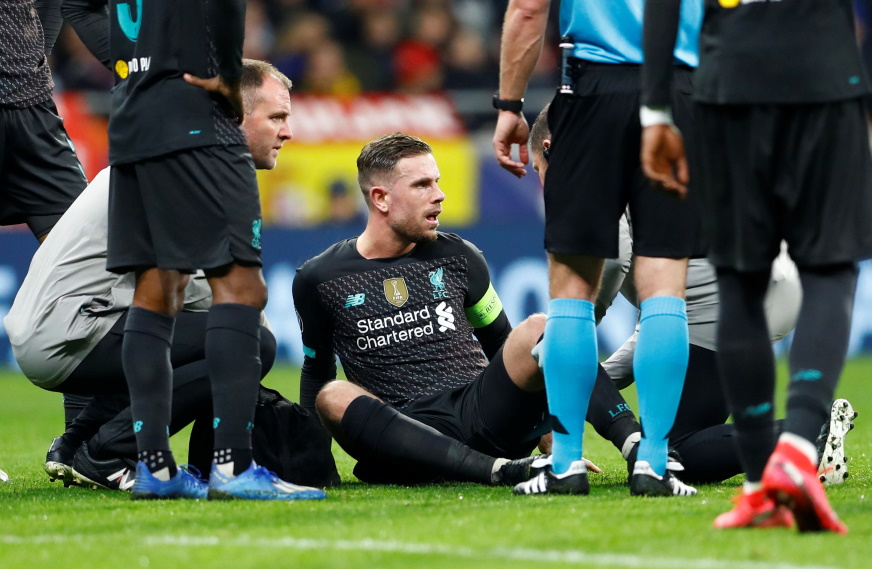 Liverpool are sweating on the fitness of Jordan Henderson after he picked up a hamstring injury against Atletico Madrid on Tuesday night.

The Reds have work to do reach the quarter-finals of the Champions League after they slipped to a 1-0 defeat in Madrid, while the injury to Reds skipper Henderson is also a concern.

The midfielder limped off the field with 10 minutes remaining and Liverpool will now be keeping their fingers crossed it is not a serious one. Everything should become a lot clearer in the next couple of days, and the Reds now face an anxious wait.

Meanwhile, Jurgen Klopp is hoping for more Anfield magic after his holders were narrowly beaten in the first-leg tie.

Saul Niguez scored the only goal of a dour last-16 contest at the Wanda Metropolitano Stadium, leaving the Premier League leaders needing a turnaround in the second leg in three weeks’ time.

Anfield has played host to many famous European nights, the greatest of which arguably came last season as Liverpool overturned a 3-0 deficit against Barcelona in the semi-finals.

Defeat in the first leg.

Back to Anfield for another big European night next month 👊

The Atletico crowd certainly played their part in a ferocious atmosphere in the Spanish capital and Klopp now wants Reds to produce their own version.

“We speak from time to time about the power of Anfield and the power a stadium can have, tonight you saw that,” the German said.

“It’s half-time and we are 1-0 down. Why should we give up? Even better, the second half will be in a different stadium, our stadium, that will be different and Atletico will feel that, and that’s what we are looking forward to.”

Niguez struck after just four minutes as Liverpool failed to clear a corner. It was one of a number of openings the hosts created early on as the Merseysiders made an unusually shaky start.

The side that have won 25 of their 26 Premier League games this season were then made to pay the price for their sloppiness as Atletico retreated to spend most of the rest of the game sitting back.

However Klopp is not reaching for the panic button and believes his players and the hot Anfield atmosphere can help to turn it around.