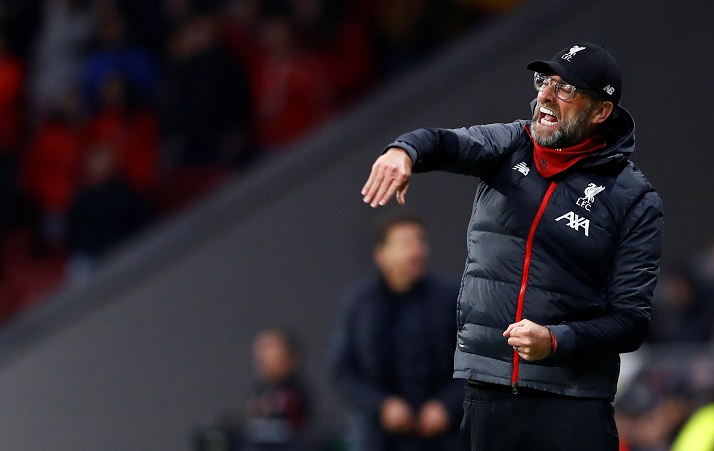 The Reds, who have had a near-perfect season this year, suffered a rare defeat at the hands of Atletico Madrid as they went down 1-0 at the Metropolitano on Tuesday.

Saul Niguez’s strike after just four minutes preceded a classic Diego Simeone defensive masterclass as Los Colchoneros shut out the Reds for the remainder of the contest.

It means Liverpool face a battle to defend their Champions League crown with the second leg of their last-16 tie taking place on March 11.

However, they are back in Premier League action on Monday as they welcome David Moyes’ struggling West Ham to Anfield.

It is the first league game Liverpool have played on their own patch for over three weeks after defeating Southampton 4-0 on February 1.

Speaking to the club’s official matchday programme, Klopp says he is looking forward to the encounter with the Hammers and urged his side to keep up their hard work and intensity.

Back home. Family, friends and another night under the Anfield lights 💫#ThisMeansMore pic.twitter.com/WTJlCCDqkW

“I must say it’s fantastic to be back. We come into this after contrasting results – having won at Norwich by a single goal and lost in Madrid by the identical margin,” he said.

“In many ways, both those games and both those results illustrate how hard we have to keep working if we want to achieve things. West Ham is an opportunity to immediately strike back. We have a talented opponent coming to our home and they want to leave with the win.”

Liverpool will be missing captain Jordan Henderson for the match after he was ruled out for three weeks with a hamstring injury.

The England midfielder has been a virtual ever-present this season but was forced off late on against Atletico.

Klopp has plenty of options to step in for the 29-year-old, with James Milner and Naby Keita vying for starts.

Liverpool’s last game against the Hammers was just three weeks ago, with the game being rearranged due to Reds’ participation in the FIFA Club World Cup.

Mo Salah and Alex Oxlade-Chamberlain scored as the unbeaten table-toppers sealed a 2-0 win.