Home Premier League Liverpool How do Liverpool improve their squad in the summer?

How do Liverpool improve their squad in the summer? 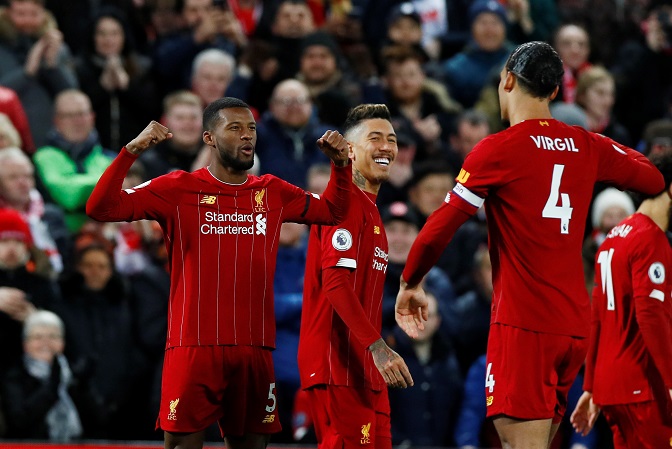 Liverpool are so far clear of the chasing pack, it is difficult to point out where they need to strengthen in the summer.

Not many teams in the history of top-flight football have had such an enormous advantage with 11 games still to play.

Liverpool’s 3-2 victory over West Ham on Monday moved them 22 points clear of Manchester City, meaning they can clinch the title with just four more victories.

Encouragingly for the Reds, that title clincher could come at Goodison Park when they take on Carlo Ancelotti’s Everton on March 16.

The 2019-20 campaign has been about as perfect a season as Liverpool fans could have asked for.

While it is debtable that they have not been as thrilling to watch as last season, they have developed an uncanny knack for grinding out results when not playing at their best.

The Hammers game was a shining example of that – Liverpool’s passing was not its usual crisp self and defensively, they looked vulnerable on occasions.

However, with talent such as Mo Salah and Sadio Mane on the field, the Reds were always going to have a chance.

Given how Liverpool are almost certain to not just win the league but do so in such a record-breaking fashion, you just wonder what areas of the field need strengthening.

The Brazilian is the lynchpin up front, and his presence allows both Mane and Salah to score so many goals due to his technique and clever movement.

Divock Origi is a very useful player and worked his way into Liverpool hearts with his Champions League heroics last season, but doesn’t have the same aura as Firmino.

Leipzig hitman Timo Werner has been strongly linked with a move to Anfield in recent months and the Germany international could prove to be a savvy addition.

Beyond that, however, you are scratching your head to find any weaknesses.

Extra cover in midfield could be an area that Jurgen Klopp looks at – James Milner is 34 now and his bristling energetic style of play cannot last forever, while Adam Lallana’s contract is due to expire in the summer.

Klopp may look to keep everything else as it is – after all, stability is one of the reasons why Liverpool have become such a force.

Several youngsters are knocking on the door and their performances in cup games have been very encouraging.

Trent Alexander-Arnold and Andy Robertson have no real cover at full-back, but Neco Williams and Adam Lewis were both outstanding against Shrewsbury in the FA Cup, while wingers Curtis Jones and Harvey Elliott have been earmarked as huge prospects after numerous cameos this season.

Liverpool have been so utterly dominant this season that they have little need to splurge in the summer, so Reds fans might have to expect a quiet few months.