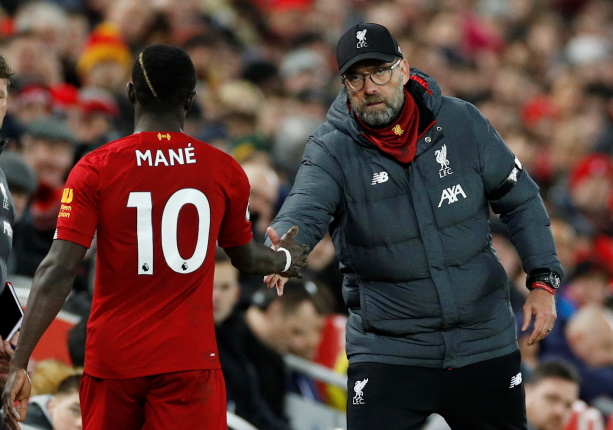 The Reds are closing in on the Premier League title but they are matching and breaking all kinds of records along the way.

A 21st successive league win at Anfield matched the Reds’ own top-flight record, set between January and December 1972, while an 18th consecutive victory drew them level with Manchester City’s Premier League landmark set in 2017.

They have dropped just two points this season and even Klopp, usually reluctant to celebrate milestones, has been impressed with how his side have progressed over the last few years.

“Tonight was difficult obviously, so the number of wins you can only have if you win all of these games: the difficult ones, the easy ones – if there ever was one – the brilliant ones and the rougher, more grumpy ones.

“In the end, that’s what counts. We all know it’s very special, but in the moment we are really just in the situation and want to recover and prepare for the next one.”

Klopp was also impressed with the spirit and fight shown by his players and says while that remains, they will always do well.

Another record was equalled on the night as Trent Alexander-Arnold matched last season’s Premier League landmark of 12 assists from a defender, having supplied the crosses for Georginio Wijnaldum’s opener and Sadio Mane’s winner.

In between, Issa Diop and Pablo Fornals had threatened to pull off the shock of the season for the league’s 18th-placed side by ending the Reds’ incredible 417-day unbeaten league run.

However, an embarrassing goalkeeping howler in front of the Kop from Lukasz Fabianski allowed Mohamed Salah to equalise before Alexander-Arnold and Mane combined.