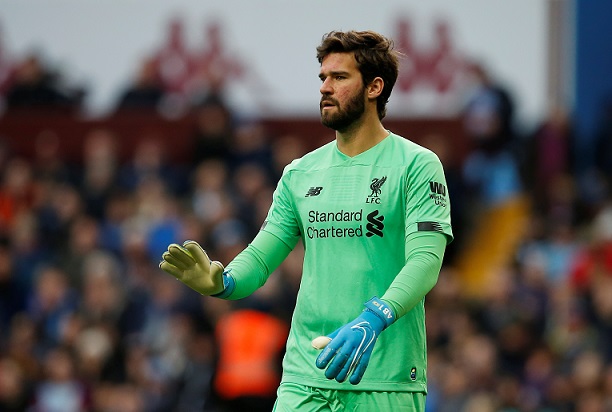 Jurgen Klopp says Liverpool will be without goalkeeper Alisson for at least a week after he was diagnosed with a hip injury.

The Brazil international picked up the injury in training ahead of Tuesday’s 2-0 FA Cup fifth-round defeat to Chelsea, a game he was due to sit out anyway.

Adrian took his spot between the sticks and had a night to forget as he made an error which provided the opening goal for Willian.

🚨Chelsea knock Liverpool out of the FA Cup in the round of 16🚨
Thanks to a blunder from Adrian and a stunning strike from Ross Barkley Chelsea advance with a 2-0 win
[ @EmiratesFACup ]#CHELIV pic.twitter.com/JvvHXtqQUn

The Spaniard is now set to keep his place in between the sticks for at least the next two matches after further investigation of Alisson’s injury uncovered he would need to spend a spell on the sidelines.

The German wasn’t entirely confident Alisson would be fit for the short trip to Goodison Park on March 16 either when discussing how long his No.1 would be out for.

“We will see next week for sure,” said Klopp, at Friday’s press conference. “It is a slight muscle injury in the hip region, you could all do your work still but a professional goalkeeper is slightly different.

“I don’t want to say no [for Merseyside derby] but I am not sure. We have to judge the situation next week. After the international break he will be 100% but we will see.”

It isn’t the first time Alisson’s fitness had been an issue for Klopp this season with the 27-year-old missing nine weeks at the start of the campaign with a calf issue.

Adrian stepped into the breach on that occasion and didn’t hinder Liverpool’s cause as they made a storming start to the season, helping them win the Uefa Super Cup as they beat Chelsea on penalties

However, behind the tightest defence in the Premier League, Adrian has only managed three clean sheets in 20 appearances for the Reds and that will be a worry heading into the game with Atletico, who lead the last-16 tie 1-0 after the first leg.

While Klopp is hopeful Alisson could be back next weekend, Brazil’s decision to leave him out of their squad for the World Cup qualifiers with Bolivia and Peru later this month raises the possibility of him being out until early April.