Home Premier League Liverpool Behold the age of the full-back

Behold the age of the full-back 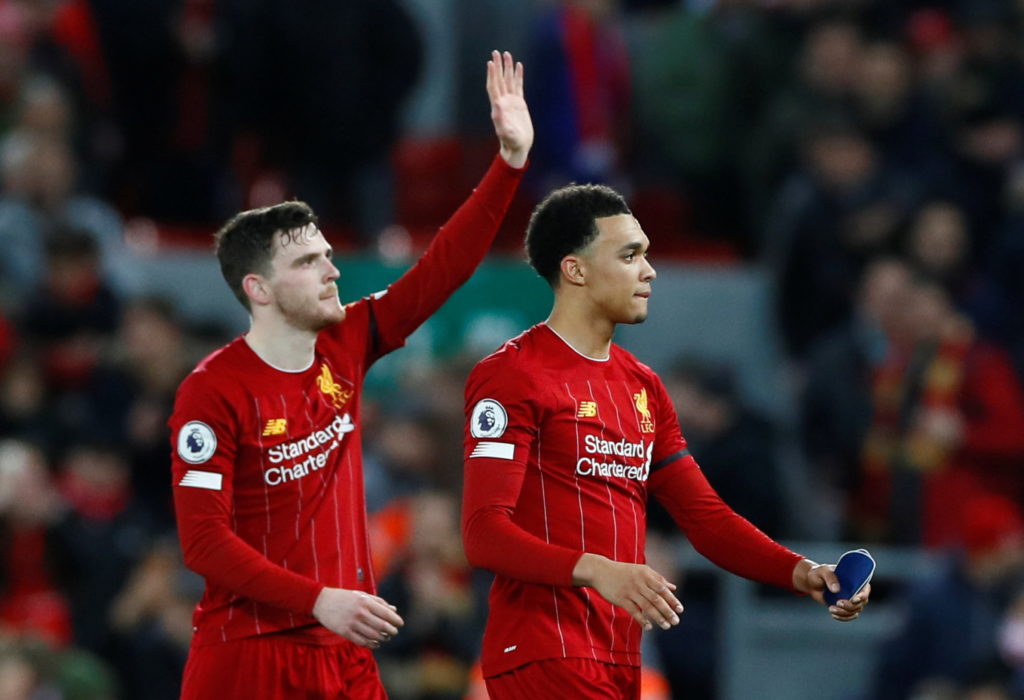 Playing as a full-back used to be seen as somewhat of a snub, with the position often being worthy of only the worst players in the team.

Always last to be picked at school, full-backs were often too slow to play as wingers, not big enough to be central defenders or lacking the skill to feature in midfield.

However, in this age of inverted pyramids, inside forwards and false nines, full-backs have become crucial cogs for all successful sides, with Liverpool leading the way.

After a couple of blips in what has been another otherwise flawless campaign, is it any coincidence that their drop in form has coincided with Trent Alexander-Arnold and Andrew Robertson going slightly off the boil?

The pair are arguably the best full-back partnership in world football, incredible really when you consider they cost a combined £8m, Alexander-Arnold coming through the academy and Robertson signing in 2017 from relegated Hull.

Between them they have produced 19 assists in the Premier League this season and look on course to at least match last term’s combined total of 23.

In contrast, Manchester City, who narrowly pipped the Reds to the title in 2018-19, have struggled at the back. Of course, much of that has been down to Aymeric Laporte’s injuries and John Stones’ wayward form but there have been other issues.

While Benjamin Mendy’s performances have again shown signs of being hindered by his wretched injury record, it is arguably Oleksandr Zinchenko’s fitness issues that have been more troublesome.

The Ukrainian is an attacking midfielder by trade but was terrific when deputising at left-back during last term’s domestic treble.

Unlike assist machines Alexander-Arnold and Robertson who are instructed by Jurgen Klopp to stretch the pitch, Pep Guardiola likes his full-backs to be auxiliary midfielders.

Having someone of Zinchenko’s ability drifting in off the flank to act as an extra playmaker helped Guardiola’s men excel. His absence from the end of October to the start of December saw the Citizens stumble, losing to Liverpool and drawing with the likes of Atalanta, Shakhtar Donetsk and Newcastle.

On the right flank, Joao Cancelo was signed from Juventus in the summer but has struggled to settle, providing Kyle Walker with an extra life.

The Portuguese seems to be finding his feet after some tough love from Guardiola but it is too little too late as far as the Premier League champions’ defence is concerned.

Tottenham are another team who used to rely on their full-backs, with Walker and Kieran Trippier duelling for a place on the right, while Ben Davies and Dan Rose fought on the left.

Including Rose’s loan to Newcastle from which he is unlikely to return, three of that quartet have since left Spurs and with adequate replacements not found, their form has disappeared. As a result, a rebuilding job is required with two full-backs top of Jose Mourinho’s shopping list for the summer.

“I knew after a month I was never going to play.”

Danny Rose says he was not given the same opportunities as his fellow defenders to prove himself to Jose Mourinho.

A final case study can be seen in La Liga where Barcelona, although top of the table, lack their previous dynamism. Why? Because Jordi Alba is a shadow of the player he once was while at right-back, for all their qualities, neither Nelson Semedo nor Sergi Roberto are a patch on a real pioneer of modern-day defending, Dani Alves.

Alves’ switch from Sevilla in time for Guardiola’s first season in 2008 ushered in a golden age for the club that saw them pick up six La Ligas in his eight seasons at the Nou Camp, as well as three Champions League crowns.

Even on the international stage full-backs are proving significant. Croatia’s big ploy ahead of the 2018 World Cup final against France was to suggest Sime Vrsaljko was injured, having fed the media similar stories throughout the tournament, only for the Atletico Madrid man to shine through the knockout rounds.

Previously shunned and laughed at, full-backs are now earning their corn and with kids idolising the likes of Alexander-Arnold and Robertson, that most unfashionable of positions is well en vogue.