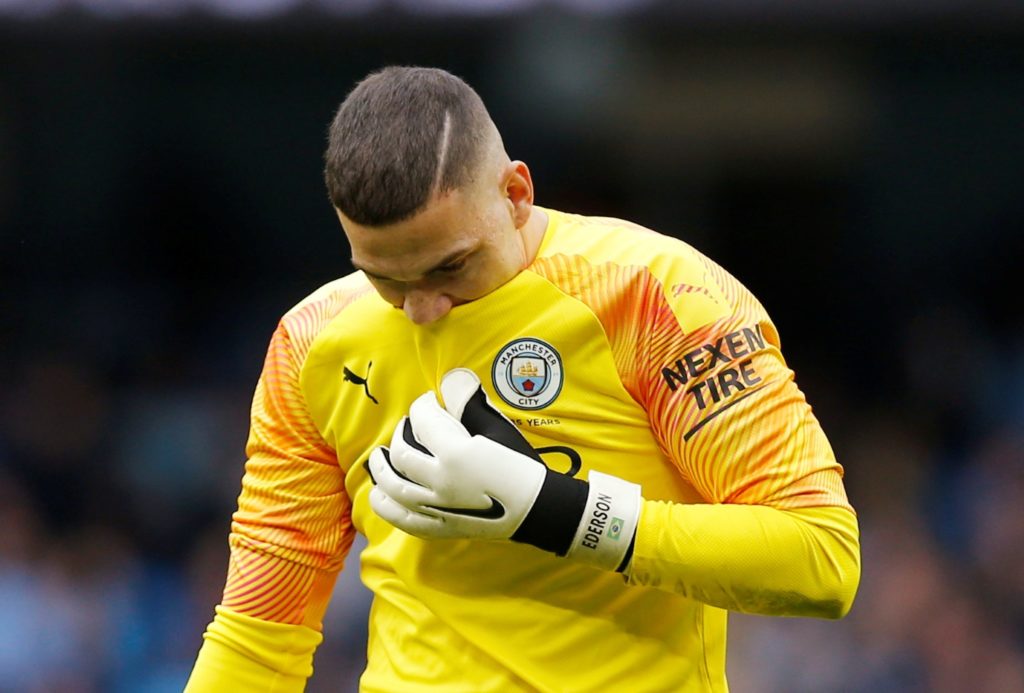 Manchester City will be boosted by the return of goalkeeper Ederson for Saturday's heavyweight showdown with Chelsea at the Etihad Stadium.

A muscular problem kept Ederson out of City’s top-of-the-table clash with Liverpool before the international break and his absence was certainly felt, as Pep Guardiola’s side were on the receiving end of a 3-1 defeat at Anfield that leaves them nine points behind Jurgen Klopp’s table-toppers in the standings.

However, Guardiola has now confirmed his undisputed number one will be available for Saturday’s contest, although Leroy Sane and Aymeric Laporte remain long-term absentees, while Bernardo Silva is suspended.

“Ederson is back. He trained in the last few days without pain,” Guardiola told reporters. “Aymeric Laporte and [Leroy] Sane are still injured for two or three months.”

The defeat to Liverpool means City will head into Saturday’s match sitting a point behind Chelsea in the standings, with the Blues having won six league games on the spin under Frank Lampard.

Christian Pulisic has played a key role during the latter part of that run, scoring five goals in his last three top-flight appearances, and Chelsea will be boosted by the news that the United States international has returned to training following a hip problem.

Fellow winger Callum Hudson-Odoi is less likely to feature due to a hamstring problem, but Jorginho is available after serving a ban.

City have won five of the last six meetings between the two sides across all competitions, including a 6-0 thrashing in the corresponding fixture at the Etihad last season.

Indeed, Chelsea have not won at the home of their rivals since 2016 when goals from Diego Costa, Willian and Eden Hazard helped them come from behind to secure a 3-1 win.