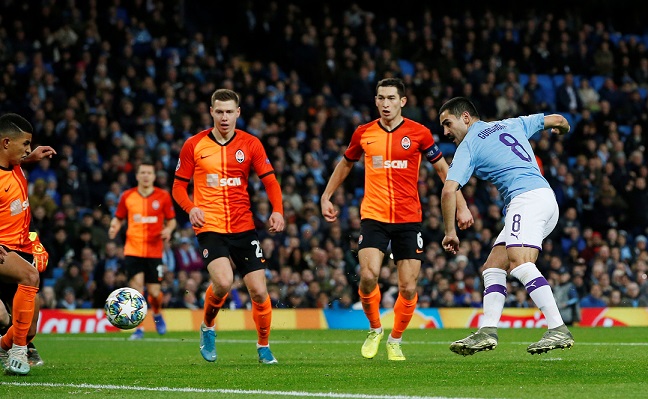 Pep Guardiola could recall Ilkay Gundogan at the expense of David Silva for Saturday's derby clash with Manchester United at the Etihad Stadium.

The City and Germany midfielder missed Tuesday’s dominant 4-1 showing away to Burnley because of a suspension, having received his fifth yellow card of the season last weekend at Newcastle United.

Gundogan has scored in successive home derbies against the Red Devils, setting the seal last November in a 3-1 win which pushed former United boss Jose Mourinho closer to the sack.

And City sources have hinted the former Borussia Dortmund star is primed to come straight back into the starting XI following his rest in midweek.

Veteran midfielder Silva turned in arguably his best display of the season at Turf Moor, but the fact remains the 33-year-old now struggles to play three games in a week.

Guardiola is also conscious of managing his legs going into an intense fixture period, although Silva will surely want to feature in what will be his final home Manchester derby, before he brings down the curtain on a decade of service at the end of this season.

Gundogan has been a trusted ‘go-to’ option for Guardiola this term, preferring the 29-year-old to slot alongside Rodri and Kevin De Bruyne at the heart of his midfield – especially with Fernandinho now being utilised at centre-back.

Rodri, meanwhile, admits he doesn’t quite know what to expect of his first derby encounter playing against Ole Gunnar Solskjaer’s team.

The £62m former Atletico Madrid starlet, who was named man of the match against the Clarets, said: “I am excited about it (the derby). It’s a great match against a top team, Manchester United.

“I don’t know what the atmosphere will be, but it’s good that it’s in our stadium. If you have not been on the pitch you don’t know how it will be.”

A win for City would just about keep their hopes of a third straight title flickering, with the Etihad outfit already 11 points behind Liverpool.