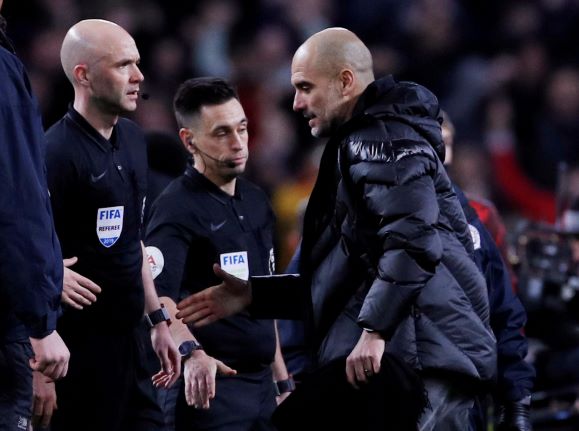 Pep Guardiola and Rodri revealed City's frustrations with VAR after being denied a penalty in Saturday's derby, but do they think Liverpool would have got one?

City were initially looking to blame outside forces for their 2-1 loss in the 179th Manchester derby with Guardiola adamant his side should have had a penalty in the first half.

Two ‘handball’ incidents in the Manchester United box were reviewed by video assistant referee Michael Oliver, but he deemed neither Victor Lindelof’s block or Fred’s arm deflection to have been worthy of a spot-kick.

However, he did overturn referee Anthony Taylor’s refusal of a penalty on Marcus Rashford for Bernardo Silva’s clumsy challenge at the other end to fuel the City feeling of unfair treatment.

Now let's compare this to the Bernardo Silva-Marcus Rashford penalty.

Here you see that it is Silva who plays his leg across Rashford. While in the Norwich example it is Basham who does it to the defender. pic.twitter.com/gJ091bsSKj

It is not the first time this season that Guardiola’s side have been dissatisfied with VAR and Rodri admitted that it is becoming a source of frustration in the Citizens’ dressing room.

“We are p***ed off by it but there is no point (talking) for us,” he said. “We have to keep fighting and don’t focus on these things.

“It is other people’s jobs – we can’t scream. Some decisions can change matches and VAR is there for getting decisions (right). It is not an excuse for us.”

Guardiola vented his frustration to opposite number Ole Gunnar Solskjaer when he felt the Norwegian should not have had the cheek to appeal for handball for his side in the second half.

And as City watch champions-elect Liverpool disappear into the distance with a 14-point advantage, can they legitimately say that VAR has made that much of a difference to the title race?

City have so far had one decision overturned by VAR in the favour and three go against them, a net total of -2 on the season.

If VAR had not been brought in this season, City would currently have an extra three points – one from the derby and two from the controversial ruling out of Gabriel Jesus’ late winner against Spurs in August.

And what about Liverpool – the club that seem to be getting the rub of the green from TV officials this term?

Well they would be only two points worse off than they are now if there was no VAR.

They would have beaten Manchester United at Old Trafford had Sadio Mane’s disallowed strike stood, but would have lost two points at Chelsea because of Mason Mount’s goal and dropped another couple at home to Crystal Palace recently when James Tomkins’ push was not originally spotted.

That makes a swing of five points in City’s direction and would put them within nine, and not 14, of the table toppers.