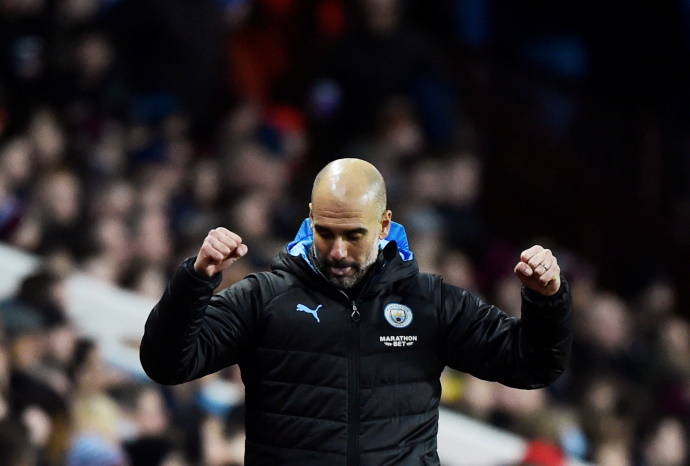 Pep Guardiola says Manchester City have to forget about winning the Premier League title despite jumping into second place on Sunday.

Liverpool pass every test that is put in front of them. The latest being a tricky trip to Tottenham, which they came through with a 1-0 victory.

City will continue to fight right to the very end and showed their class with the 6-1 demolition of Aston Villa at Villa Park on Sunday afternoon.

The victory moved them above Leicester into second but they are still 14 points behind Liverpool in their quest for a third straight title – something Guardiola accepts looks unlikely.

The former Barcelona boss has hailed the club for winning the title for the last two seasons, but has already passed the baton to the Reds for this season.

We hear from the hat-trick king himself…🎩💬

“Forget about it, we would have liked to fight against them but we could not, for many reasons,” Guardiola said when asked if Liverpool can be caught.

“Everyone made their incredible contribution and now finally after a long time we are second in the table and close to qualifying for the Champions League next season.”

The Argentina international’s treble made him the Premier League’s record overseas scorer with 177 goals.

He moved ahead of Frenchman Thierry Henry and drew level with Frank Lampard in fourth spot in the all-time stakes.

Riyad Mahrez grabbed a first-half brace with Gabriel Jesus also netting after Aguero’s first to make it 4-0 at the interval.

City were relentless with Aguero – who now has 249 goals for the club in all competitions – wrapping up his treble in the second half to set a new Premier League record of 12 hat-tricks, passing Alan Shearer’s mark.