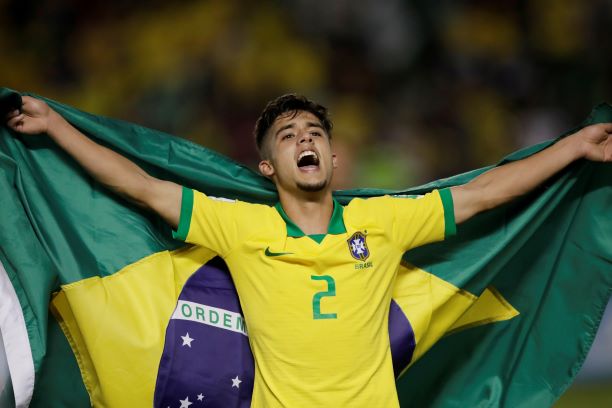 Man City have reportedly beaten Arsenal and Barcelona to the signing of Brazilian Under-17 ace Yan Couto, who will be loaned back to Coritiba until he turns 18.

Various sources in Brazil, including Globoesporte and ESPN, report that City have won the race to sign the exciting teenager for a fee close to £11.5million.

The same sources report that Barcelona had been interested in signing the 17-year-old right-back although their offer of £7.7m was not deemed acceptable.

But, according to reports in Brazil, City have almost doubled what Barcelona were prepared to pay. The offer reportedly includes an initial fee of £7million with another £5million in add-ons.

Couto and agent Marcelo Robalinho travelled to Manchester on Wednesday to rubber-stamp the deal and it should be announced once the youngster passes his medical.

Robalinho was also present at the Etihad Stadium in December for the Manchester derby and posted pictures on Instagram to prove it, which suggest the deal has been in the pipeline for some time.

The plan is for him then to return to Coritba, where he will remain until he turns 18 on June 3, because he cannot be registered by an overseas club until that day in accordance with Fifa rules.

City are also understood to have beaten the Gunners to Couto’s capture, with reports emerging in December that Arsenal had been following his progress closely.

His performances for Brazil’s Under-17 side caught the attention of Europe’s biggest clubs as his surging runs down the right were a major feature of the Selecao winning the  2019 Fifa Under-17 World Cup on home soil.

He only missed two matches throughout that tournament – both through suspension.

He provided the crucial assist for Lazaro Vinicius to score a stoppage-time winner in the final to secure a 2-1 victory over Mexico.