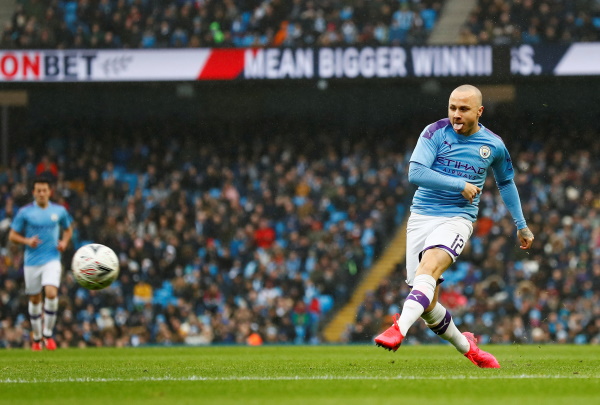 Bundesliga table toppers RB Leipzig have signed Manchester City left-back Angelino on loan for the remainder of the season.

Despite being only six months into his second spell at the Etihad club, Pep Guardiola has allowed the Spaniard to leave on a temporary basis after failing to establish himself in the first team.

He was third choice left-back for City with Benjamin Mendy and Olexandr Zinchenko both playing more regularly.

A buy-back clause was activated in his deal in the summer and City duly snapped him up from Eredivisie outfit PSV.

However, he has only gone on to make six appearances in the Premier League with his last outing being in City’s 2-1 home derby loss to Manchester United in early December.

Despite being used extensively in cup competitions, the club have decided to allow him to join Leipzig, who are chasing their first-ever Bundesliga title.

He is expected to fight for a place in Die Roten Bullen’s ranks with Germany international Marcel Halstenberg, and he could make his debut in the crunch clash with third-placed Borussia Monchengladbach at the Red Bull Arena on Sunday.

Leipzig have the option to make the move permanent for a fee of approximately £25million if the transfer proves to be a successful one.

Angelino initially joined City in 2014 and spent four years there without making a first-team appearance.

Following numerous loan spells which included stints in the USA, Spain, and Holland, he joined PSV on a permanent basis in the summer of 2018.

The 23-year-old impressed in his solitary season and Guardiola moved to bring him back in the summer.

However, Mendy’s return to fitness has limited his game time and now he will hope for more regular football in Germany.

City have had a very quiet transfer window in terms of incomings and instead have used it to ship out younger players.