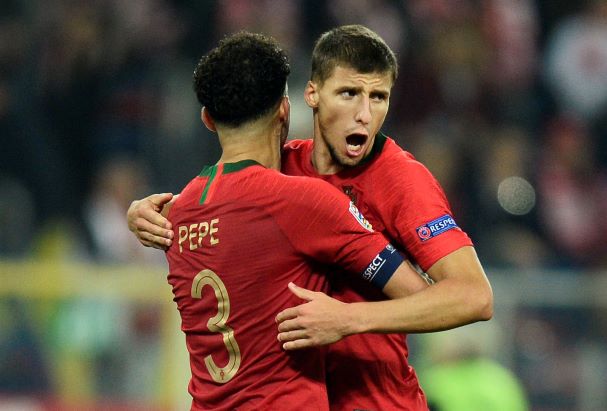 City discovered that they have a two-year European ban hanging over them on Friday, but work continues to improve Pep Guardiola’s squad with the best emerging talent from overseas.

And with this summer’s transfer window being potentially the last opportunity for British clubs to stock up with players from the European Union without restrictions, City are likely to be very active.

The club are regular attendees at top-flight matches in Portugal and it was no surprise to see that City sent a scout to Benfica’s league game with Sporting Braga on Friday night.

Two Benfica players have been linked to City so far this year – midfielder Florentino Luis and centre-back Ruben Dias, but only one of them was one show.

Florentino, 20, has been exiled from the league line-ups by boss Bruno Lage for the last three months and only plays in cup matches, so the City scout will have known he would not have been in action beforehand.

Dias, 22, is a classy defender and looks ripe for a big-money move to one of Europe’s biggest leagues, but even he could not prevent Braga running out 1-0 winners at the Estadio da Luz.

Earlier this month it was reported by The Express that Dias was the cornerstone of Jose Mourinho’s future planning at Tottenham, although they admitted that Liverpool and City were also both interested in a player linked to Wolves last year.

Now he’s become a regular for Sparta Prague and became the youngest goalscorer ever in the Czech league, what a guy.

The Citizens also sent one of their eastern European spies to Prague on Saturday for the Czech Liga clash between Sparta and Slovan Liberec.

The likely target for the scout in the match at Generali Arena was 17-year-old Sparta forward Adam Hlozek.

Last October, Hlozek was included in the Guardian’s Top 60 list of young talents and they wrote he “is the most talented young player to emerge in the Czech Republic since Tomas Rosicky”.

The teenager has scored three senior goals for Sparta this season, but could not add to that tally as Sparta went down 2-0 to Slovan.