Has De Bruyne shown why he should be named Premier League Player of the Season? 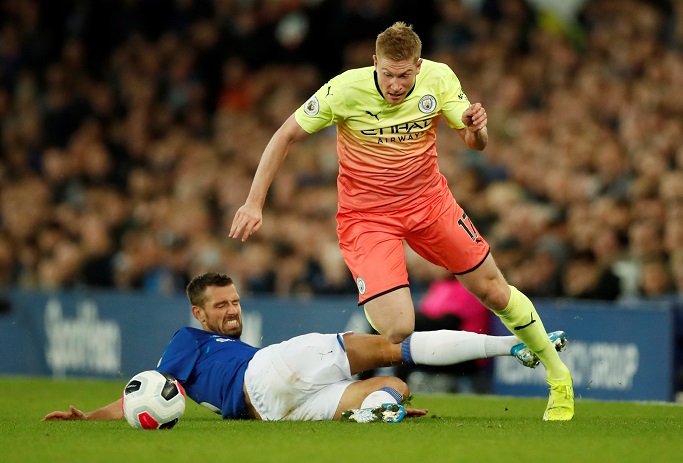 Kevin De Bruyne produced a masterclass for Manchester City in Wednesday's victory over West Ham, proving why he deserves the Player of the Season award.

Belgium international De Bruyne arrived at the Etihad Stadium from Wolfsburg in August 2015 for a then club-record £55million and he has been a standout player for the club ever since, picking up seven trophies along the way.

The 28-year-old struggled with injury last season, limiting to just 19 Premier League appearances and his lowest return in terms of contribution since joining, but he has proven to everybody this term just why he is one of the best players in world football.

Although Liverpool are running away with the title, De Bruyne has continued to perform for the Citizens and he produced a man of the match display in Wednesday’s comfortable 2-0 home victory over the Hammers.

The midfielder provided the assist for Rodri’s opener in the first half before the Belgian then netted the crucial second goal in the 62nd minute, combing nicely with Bernardo Silva before firing a low strike in at the near post.

De Bruyne now has eight league goals for the campaign, but it is the assist department where he has thrived in particular with his set-up in that victory taking him to 16 for the season – Liverpool’s Trent Alexander-Arnold is the closest challenger on 10.

Recent talk had been about Jordan Henderson, who is on the verge of captaining the Reds to a first PL title, about picking up the award after producing some brilliant performances in the middle of the park.

The Englishman’s club team-mate Sadio Mane has also been talked about to claim the honours, having netted his 12 goal in the 1-0 win over Norwich City on February 15 to take his tally to 12.

🔥 Sadio Mane in the Premier League this season…

However, although the Liverpool duo are performing well, De Bruyne just seems to be outperforming them in an individual capacity and this is why he should be handed the award for the first time.

Amazingly, only one City player has been named Premier League of the Season since it’s inception in 1994/95, that being former captain Vincent Kompany in the 2011/12 campaign.

Despite the Premier League title heading to Anfield, the award doesn’t have to go to a player that has lifted the trophy – this has been shown over the past two seasons – and De Bruyne should be crowned top dog.

It is sure to be a tight battle between the City maestro, Mane and Henderson, with their performances over the remaining months of the season set to have a big outcome on which players claims the spoils.