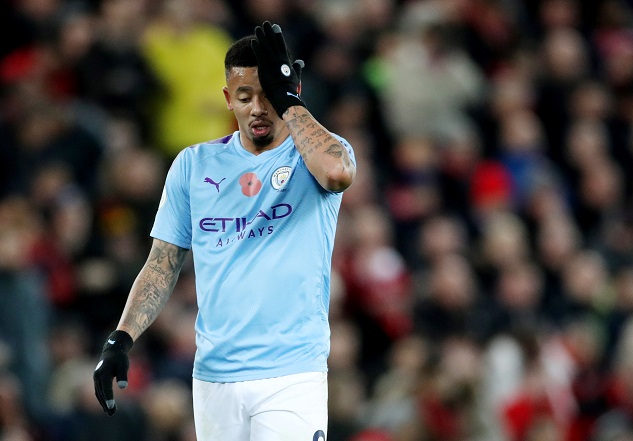 Gabriel Jesus proved to be Man City’s matchwinner on Saturday, but statistics show he is missing too many big chances compared to the best strikers around.

The Brazilian came off the bench to claim the only goal in City’s 1-0 win over Leicester City at King Power Stadium as Pep Guardiola’s men opened up a seven-point gap over the third-placed Foxes.

However, he was profligate on his last start for City in the 2-0 home win over West Ham United, missing two obvious opportunities to put his team ahead.

Jesus has now missed a grand total of 52 ‘big chances’ – as they are called by Premier League statisticians – since he joined the champions.

During that spell, the £30million striker has scored 37 league goals.

As a rule of thumb, top-quality forwards really need to be scoring more goals than the big chances they miss, although not all goals scored will be from ‘big chances’ at all with some created and finished out of nothing and owing much credit to the striker.

Jesus will be being directly compared to Sergio Aguero by City’s own performance analysts, who will be well aware that his goals to big chances missed ratio looks poor in relation to ‘Kun’.

I wrote about Gabriel Jesus, because he fascinates me. He missed some really big chances against West Ham, which is the reason his City future is a little unclear. Surely, at 22, he’s got time to improve, but they have their doubts. https://t.co/42dt1XGywS

The Argentinean ace has scored 180 Premier League goals during his City career, but only missed 124 big chances – a ratio of 1.45 to 1.

Even Marcus Rashford, who has missed a few howlers in his time, can boast a positive ratio (1.17) but Jesus’ is some way below one right now at 0.71.

What will be concerning for Guardiola’s coaching staff is that Jesus does not appear to be getting more efficient in his finishing, but actually less so.

He scored seven goals in his first season in English football, 2016-17, and missed only three big chances.

The next campaign saw the ex-Palmeiras man score 13 times and waste the same number of big chances.

Of course, he is still a few years away from reaching his peak and can easily turn it around while he looks likely to break his own personal best for Premier League goals scored this season, no matter how many other opportunities he passes up.