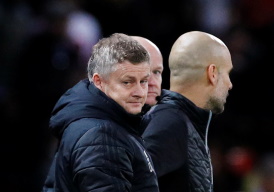 Manchester United manager Ole Gunnar Solskjaer admits his side have a "steep mountain to climb" after Manchester City left Old Trafford with a 3-1 win.

United were hoping to build up some kind of advantage in Carabao Cup semi-final first-leg clash, but it was Pep Guardiola’s side who put themselves in the box seat to make the final.

Marcus Rashford’s goal may have given them a lifeline, but City will still be the hot favourites to go through to face either Leicester City or Aston Villa.

The England striker’s 70th-minute goal does give them some hope for the second leg though having been out-played and out-thought by Guardiola and his side in a first half which brought goals for Bernardo Silva, Riyad Mahrez and an own goal from Andreas Pereira.

United won in the league at the Etihad a month ago but on the basis of their performance at Old Trafford – 45 minutes which Solskjaer described as the worst of his reign – they will have to considerably improve if they are to stand a chance of making it to Wembley on March 1.

“Of course it is a difficult task we have in front of us but that second half at least gave us something to hang on to,” he said. “From the first goal until half-time we just couldn’t cope with the setback, we were running in between, we let them play, our heads dropped, made decisions we shouldn’t do and that needed sorting at half-time and I think second half was a good response.”

United have shown they can turnaround first leg deficits in the past when they lost 2-0 at home to Paris Saint-Germain in the Champions League last season before going through in the French capital.

Solskjaer admits it is steep mountain to climb at the Etihad Stadium, but believes his players have what it takes to do it.