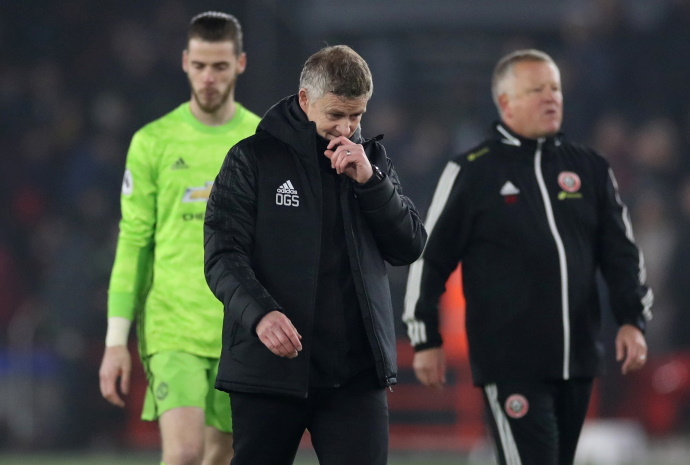 Ole Gunnar Solskjaer reportedly told his squad they could 'earn him the sack' if there is a repeat of Tuesday's first-half horror show against Manchester City.

The Manchester United chief is feeling the heat after a miserable few weeks, which has seen his managerial credentials questioned once again.

The Red Devils have slipped off the pace to finish in the Premier League’s top four, with a problematic FA Cup home replay to come against Wolverhampton Wanderers, having failed to register a single shot on target when they met last weekend at Molineux.

Old Trafford insiders claim Solskjaer told his players at half-time that they faced being humiliated if they were to carry on in the same vein against City.

Guardiola’s men could easily have scored more goals. Still, Marcus Rashford’s low shot has given United a glimmer of hope they can yet triumph at the Etihad in three weeks for the Carabao Cup semi-final second-leg.

Solskjaer later described United’s showing in the first half against City as “the worse we have played” and it’s understood the Norwegian made it clear in the dressing-room that such showings will see him axed.

On last Tuesday’s Manchester derby: “Of course you're disappointed when you lose a game against your local rivals, but I’m sure we'll get a reaction tomorrow.”#MUFC #MUNNOR

A squad source said: “Ole had previously told the players they will get him sacked and he chose half-time against City to remind a few again of that.

“He was looking for a reaction and felt he got one, although it is clear Ole and his staff don’t feel they are being done any favours by some players at present.”

United have just two wins in their last six games, and Solskjaer is well aware Mauricio Pochettino and former Juventus boss Massimiliano Allegri, are being touted in some quarters to replace him.

His cause was certainly not helped with news that £80million defender Harry Maguire will likely miss the next month with a hip injury, joining midfielders Paul Pogba and Scott McTominay on the sidelines.

The Manchester giants host bottom-of-the-table Norwich City at the weekend, which will only see calls increased for Solskjaer to be replaced if they fail to secure maximum points.