Manchester United defender Bailly out to repay club for their loyalty 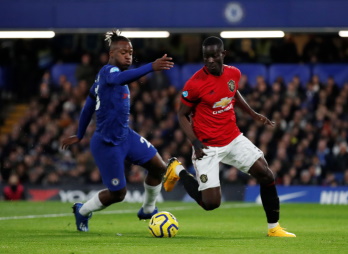 Manchester United defender Eric Bailly says he will do all he can to repay the club after they stood by him after his long battle with a knee injury.

The Red Devils centre-back is targeting regular game time between now and the end of the season after making his first appearance of the campaign against Chelsea on Monday.

Bailly started as part of a back three as Ole Gunnar Solskjaer’s men ran out 2-0 winners. Goals either side of half-time from Anthony Martial and Harry Maguire ensured United left Stamford Bridge with all three points.

The former Villarreal defender suffered a knee injury in pre-season before going under the knife. Solskjaer has since used Victor Lindelof and Maguire as his two centre-backs, with Phil Jones seemingly out of the first-team picture.

United paid £30million for Bailly during the summer of 2016, but injuries have derailed his career at Old Trafford.

After featuring in the win over Chelsea, Bailly has now made 75 appearances for the Red Devils and the club’s hierarchy showed their commitment to him by extending his contract by two years last month.

With United still able to win the FA Cup and Europa League this season, Bailly wants to repay the board, coaching staff and fans for their patience.

He told the Manchester Evening News: “A boost, to know that the club has confidence with me. I want to repay that by playing regularly and not having the injuries I’ve had. I just want opportunities to play.

“Honestly, I’m happy here right now, and there’s the right mood in the dressing room among a lot of the players. I think we will continue to improve.”

Bailly will be hoping to feature in Thursday’s meeting with Club Brugge in the Europa League, before Solskjaer’s side return to Premier League action with a home game against Watford on Sunday afternoon.

The 25-year-old’s return to fitness could effectively end Jones’ career at Old Trafford, while Chris Smalling remains on loan at Roma until the end of the season.