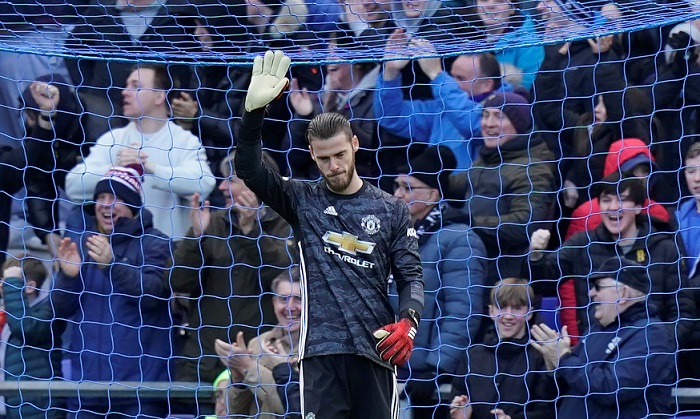 David de Gea has been a powerhouse for Manchester United in his decade-long stay but his best days are well behind him now.

Following a simple pass back, the 29-year-old took an eternity to decide what he wanted to do with the ball in possession.

And, when he decided to go for a simple long clearance, it was too late – Dominic Calvert-Lewin pressed the keeper and his kick cannoned off the forward and into the back of the net.

It was a huge error and one that could very easily have been avoided.

At half-time, the Spain international was understandably savaged by television pundits, with former United captain Roy Keane suggesting there was a touch of “arrogance” in De Gea’s play.

While Keane was perhaps too churlish and curmudgeonly on the matter (having activated his “TV Pundit” persona), the mistake was another sign of De Gea’s powers in between the sticks waning.

During the middle of the 2010s, it was almost inarguable that the former Atletico Madrid man was the best goalkeeper in the world – at a push, you could argue it was the toss of a coin between him and Manuel Neuer.

He has saved Manchester United several points throughout his Old Trafford career and managed to combine breathtaking reflexes with a real, steady command of his box – barely anything got past him, even with rickety defences providing little protection.

It was quite a transformation. De Gea, let’s not forget, looked all over the place when he first arrived in England in 2011, but the scrawny, shy, shadow of a goalkeeper turned into a goalkeeping god, at least at Old Trafford.

Why has it gone downhill so quickly? No one factor can determine his increasing number of gaffes on the field.

There is more of an emphasis on goalkeepers playing out from the back and distributing “long passes” rather than “long balls” – both Manchester City’s Ederson and Liverpool’s Alisson are trailblazers in that effect.

While De Gea is not strictly a bad operator with his feet, he doesn’t possess the same class when playing the ball out from the back. Put it this way, unlike Ederson, you’d never say of De Gea: ‘he could slot into midfield’.

Footballers have to able to adapt to the modern climate and it is doubtful he has the capability to radically change his game at 29.

Perhaps he is simply yearning for another challenge and consequently losing focus? De Gea is not far away from testimonial territory having been at the club nine years.

Yet, it has been seven years since United last won the Premier League and a return to that top-level does not appear likely in the foreseeable future.

De Gea has won everything there is to win at United, except the Champions League and might be angling for one last big move in order to claim Europe’s biggest prize.

And, there is always the lingering threat of being replaced which could be playing on his mind.

Not by Sergio Romero but by Dean Henderson, who has been a shining light in Sheffield United’s ascent from Championship mid-table to the brink of a historic European tilt.

Henderson won the Golden Glove in the Championship last season and has a similarly fantastic record this season – only Alisson and Nick Pope have kept more clean sheets in the top flight this term.

The England youth international – who is surely close to a senior squad role – has spoken openly of his desire to play at Old Trafford long-term.

United would be foolish not to be thinking about blooding Henderson next season, given how much his stock has risen in such a rapid-fire way.

De Gea has been a fantastic servant to United over the years and been worthy of all the accolades bestowed upon him.

But United must realise that his “poor form” cannot simply be dismissed as a blip – he just isn’t as good as he used to be.

While De Gea still has some value and his name still carries some clout, United should look to the future and allow him to depart.