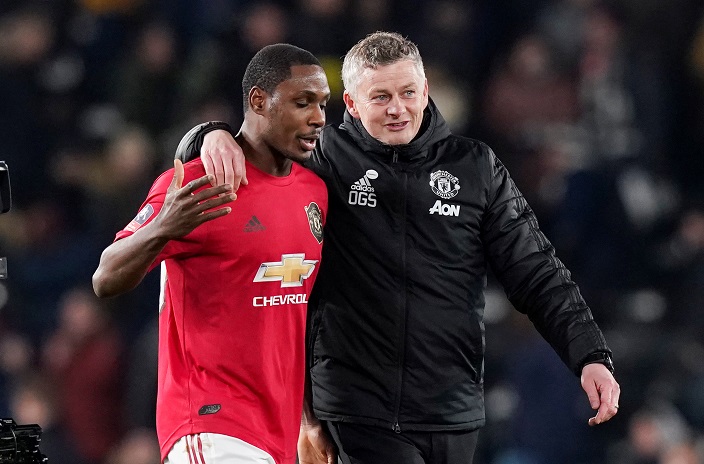 Odion Ighalo can reportedly earn a six-figure sum if he continues to deliver the goods at Manchester United during his loan stint, according to club sources.

It is stated Nigeria international Ighalo took a 40 per cent pay cut to realise his dream of playing for the Red Devils after arriving from Chinese Super League team Shanghai Shenhua on the final day of the January transfer window.

Ighalo scored his first United goal in last week’s Europa League mauling of Club Brugge and followed up with a brace on Thursday evening in a 3-0 win against Derby County in the FA Cup, securing his new team-mates a quarter-final tie away next to Norwich City.

It’s understood the former Watford player is believed to be on around £10k for each goal he scores between now and the end of the season.

In addition, Ighalo will also land a ‘significant’ bonus should United qualify for next season’s Champions League by finishing in the Premier League’s top four or winning the Europa League.

Ole Gunnar Solskjaer even hinted this week there might be an option to sign Ighalo on a permanent basis this summer, which has raised eyebrows among some supporters.

Ighalo has settled in well at the Theatre of Dreams and the African seems determined to seize his opportunity, spending more hours than most at the club’s Carrington training base.

He is certainly in with a fair chance of starting Sunday’s home derby clash against Manchester City although Solskjaer will keep opposite number Pep Guardiola guessing on his team selection until the very last minute.

The United boss has labelled Ighalo a “breath of fresh air”, adding: “It doesn’t hurt (living the dream), but he’s here on merit, he’s here because he is a goalscorer and a different type of striker for us.”