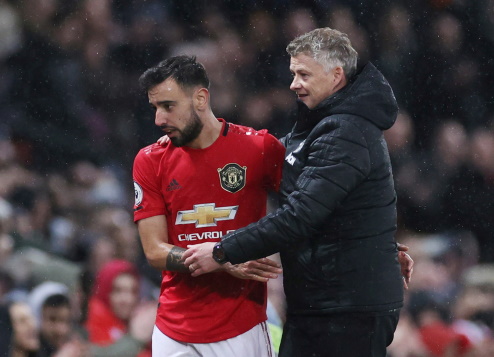 Ole Gunnar Solskjaer has saluted the impact made by Manchester United new boy Bruno Fernandes, claiming he has energised “the whole club”.

The Portuguese ace played a starring role in Manchester United’s derby victory over Manchester City on Sunday and his capture looks to be a masterstroke.

United boss Solskjaer also hailed the character of the January signing after he had the last laugh in a heated exchange with City manager Pep Guardiola late in United’s 2-0 success at Old Trafford.

Portugal midfielder Fernandes, who set up the opening goal for Anthony Martial, put his fingers to his lips after arguing with Guardiola moments before Scott McTominay sealed victory in injury time.

Asked how Fernandes had lifted the team, Solskjaer said it is the whole club he has lifted with his ability and work ethic.

“He has the desire and commitment but he has also got the X-factor, he is a risk-taker,” Solskjaer said. “He has the courage, he is brave enough to make mistakes and if you make enough mistakes it’ll be corrected into fantastic assists or goals.”

Same passion on and off the pitch.

To those at Old Trafford and beyond: thank you for making today so memorable! 🔴#MUFC pic.twitter.com/uXc8CSiGu7

Asked specifically about the incident involving Guardiola, Solskjaer said: “You need character at this club but this team they have got that. They have learned through some hard times this season. We have started something we believe in and Bruno has helped that.”

Fernandes’ arrival does seem to have kick-started United’s campaign with the team unbeaten in eight games in all competitions since his debut.

Their latest victory lifted them back to fifth in the Premier League, three points behind fourth-placed Chelsea. The win also completed United’s first league double over City for 10 years.

The United boss says his side are improving all the time and will be title contenders if they can add another three players to their ranks going forward.

But for now Chelsea and Leicester are still too far ahead of United and Solskjaer is keen to close the gap.