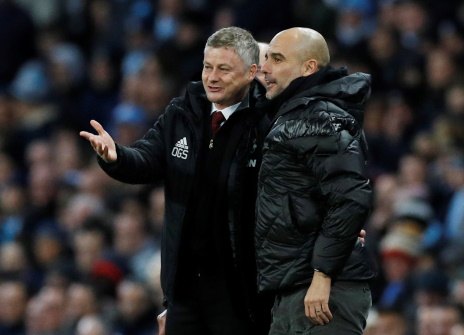 Bruno Fernandes has been getting more credit than Ole Gunnar Solskjaer for Man Utd's recent revival, but the Norwegian's tactical nous has also been a factor.

Solskjaer’s rather ordinary CV as a coach was the subject of much debate when he was given the United job on a permanent basis almost exactly a year ago.

The Norwegian’s unsuccessful spell in charge of Cardiff City was not outweighed by the years of success he had engineered back in his home country with Molde in most people’s eyes.

And when results started to turn at Easter last year some were quick to turn on the appointment of the former Red Devils striker and call it a mistake.

But Sunday’s win in the 182nd Manchester derby for his side gave Solskjaer an unprecedented third win over Pep Guardiola in the same season and enhanced his standing among the neutrals as well as some previously unconvinced United fans.

The victory was not achieved on pure emotion or effort, but involved much tactical acumen from the manager and his relatively inexperienced coaching staff.

Solskjaer chose to go with a back three to give United an extra man in midfield as the wing-backs pushed up to make it four against three in the middle of the park. The Red Devils were set-up to readily concede the majority of possession in order to utilise the tactic of hitting quickly in transition.

I cannot believe what I have just seen. Solskjaer truly outcoached Guardiola today. Two very clever goals. Wan-Bissaka shut down the entire flank. That was superb from Manchester United. Each phase of the game wisely executed.

The surprise free-kick that led to the opening goal was straight from the training ground and United defended superbly before finally settling the contest when substitute Scott McTominay latched onto Ederson’s errant distribution.

Luke Shaw’s switch to a left-sided centre-back now looks like a bit of genius and makes you wonder why none of Solskjaer’s illustrious predecessors had ever tried it. Maybe they didn’t actually have another viable left-back on the squad.

The fact that Solskjaer does is because he trusts youth players like possibly only Sir Alex Ferguson has done in the last 10 years, having thrust Brandon Williams into the first-team last year after only a handful of Under-23 games.

Until late last month, United were the only club to have taken points off champions-elect Liverpool, which they did with another superb tactical display at Old Trafford in October. Solskjaer has used split strikers to great effect in matches against Liverpool, but most other managers continue to deploy just a lone forward against them.

The voices calling for Mauricio Pochettino to replace him have died down again for now, but they may only be finally put to bed when the Norwegian has what the ex-Spurs boss does not have – a piece of silverware for the trophy cabinet.